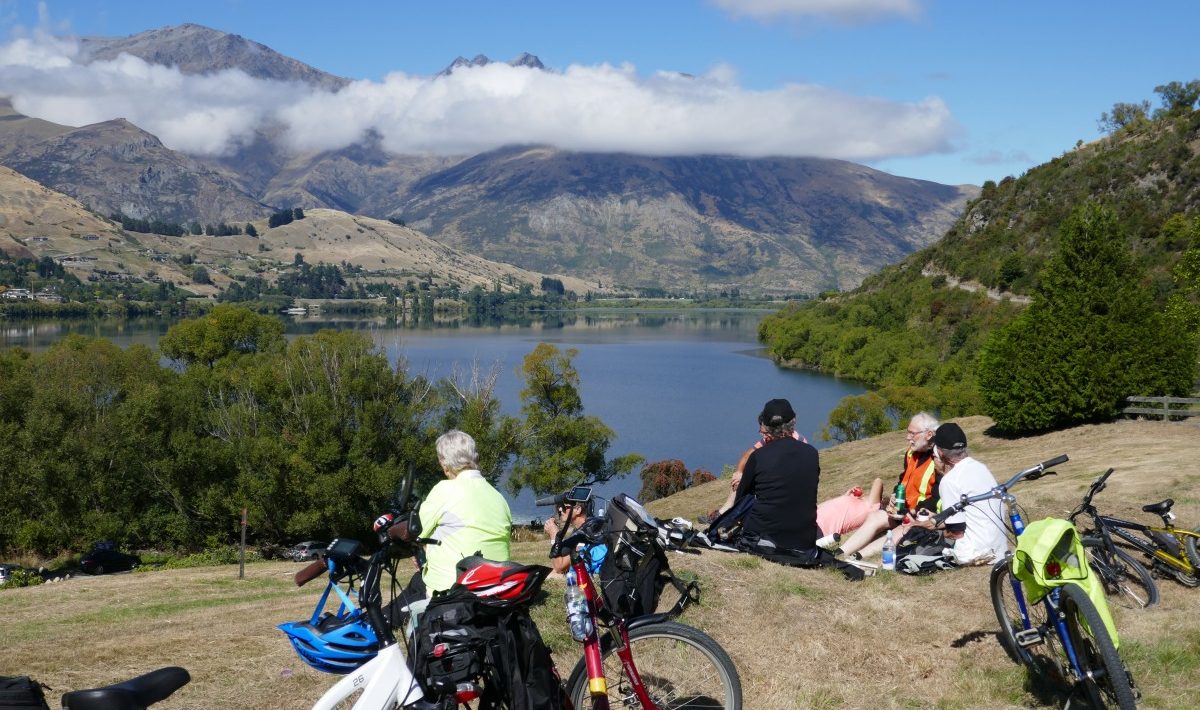 Riding the Queenstown bike trails has long been on my bucket list and in March 2017 I managed to tick that off.

Each year  a group of ten keen (average age = 70+) cyclists get together to ride some of the amazing trails around New Zealand – this year we had chosen Queenstown, Around the Mountains & Roxburgh & Clutha Gold Trails

First the Queenstown Trails: We were lucky enough that one of our group owned a time share and managed to book two houses/units side by side, about 5 kms outside Queenstown towards Frankton, for one week.

What trails would we do? The groups pedal power was made up of two E-bikes (scorned by the rest but loved by the owners), five ‘owned’ bikes and three hired bikes from ‘Around the Basin Tours’.

Arriving on Friday March 10th the weather was very unsettled but despite that we happily booked into our wonderful accommodation and enjoyed catching up with everyone’s antics for last year over some good food and wine.

On Saturday, despite some cold and drizzle the two E-Bikes (and their owners) headed out along the peninsula to the Queenstown Golf Club in Kelvin Heights, which is surrounded by the beautiful Lake Wakatipu.  It was a 10 kms easy ride out to the golf club who welcome bikers for coffee or a meal – they have put a sign on the bike trail inviting riders in!  This trail is becoming know as the sculpture trail as several sculptures have been donated by the artists.

There were four wonderful pieces of sculpture – the first one came across was the Kelvin Peninsula Goats by Auckland artist Jeff Thomson. They are beautifully positioned on a little headland along the trail. The next sculpture was a large schist & steel static kinetic sculpture (see photo) by Arrowtown artist Shane Woolridge called Thru Link to Peak  as it frames Walter Peak on the other side of the lake. The most beautiful one for me and one I nearly missed was Presence by local man Mark Hill made of Stainless & Corten steel.  Described by the artist as depicting a tree spirit, it fits so neatly into the tree line and blends with the colours and textures  ”It almost catches you by surprise as you come across it.’’(artist). There was another windblown tree sculpture by Mark also at the very edge of the Queenstown golf course. You can start this trail from Queenstown which adds about 5 extra kms, but we started it from our accommodation close to Frankton. The trail takes you along the shore of lake Wakatipu past Frankton beach, over a single lane bridge that crosses the river Kawarau. The scenery is stunning and many of the houses we passed had sculptures in their garden. 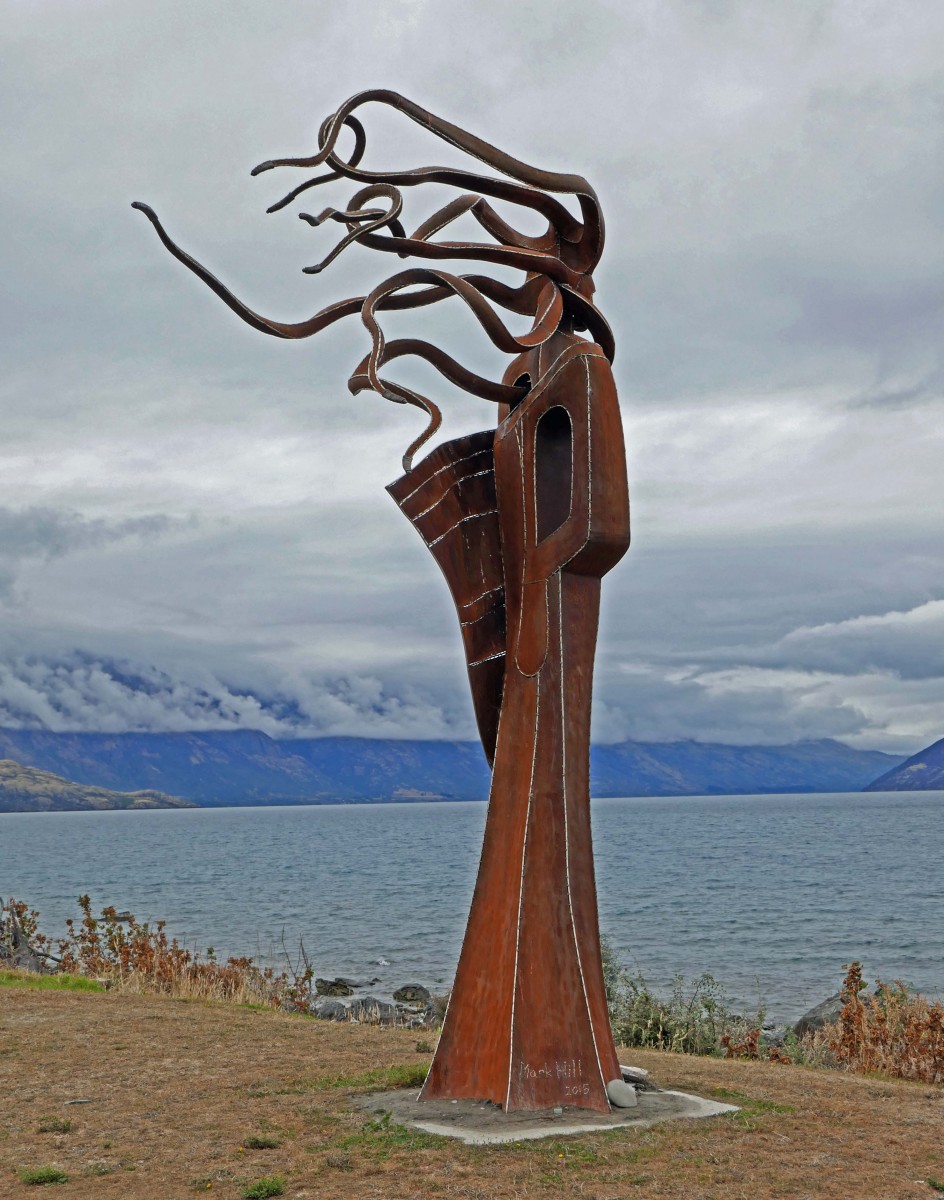 This ride is sometimes called the ‘Golf Club Coffee Ride’ by some and I can see why as it is lovely to stop at the club with its amazing views.  It was especially pleasant as were were slightly cold and wet – stepping into warm environment and ordering coffee and soup which we thoroughly enjoyed.

After leaving the golf club we went back down to join the trail and followed it right around the golf course until it rejoined the trail, after completing a full circle.

Next day all the group ventured out on the same ride . And once again we all enjoyed refreshments at the Queenstown Golf Club.

We had planned three main rides in the Queenstown /Arrowtown area but had put them on hold as the weather was slowly improving.

Our plan was to use ‘Around the Basin’ shuttles to take us to various points on the trails and cycle back so we booked three days with them – Monday, Tuesday & Wednesday but as weather was inclement we moved our booking back one day which was not a problem for them.

Tuesday morning was cold but fine and we and our bikes were picked up outside our accommodation by Around the Basin shuttles and driven to Arrowtown where the driver gave us maps and a suggestion for coffee!  Off we went to ‘Provisions of Central Otago’ who advertise “obscenely good sticky buns” but we resisted the temptation and only had coffee – we felt we had not quite earned the ‘sticky bun’ yet!

Finally we were on the first of our three planned rides – it was 35kms + 8kms around Lake Hayes. 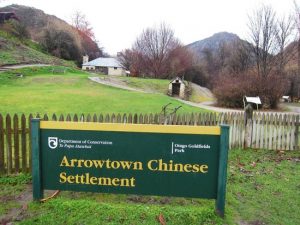 We left Arrowtown riding past the restored Chinese settlement.  Everywhere we went in Otago we learned about the Chinese goldminers and their impoverished and alienated life driven by the Europeans who had followed the gold -unfortunately Arrowtown was no different.

Arrowtown Chinese Settlement is a recreation (some of it is original and restored) of the Chinese-occupied part of this 19th century gold mining town. In the 1874 Census, there were over 3,500 Chinese workers in the region at that time. 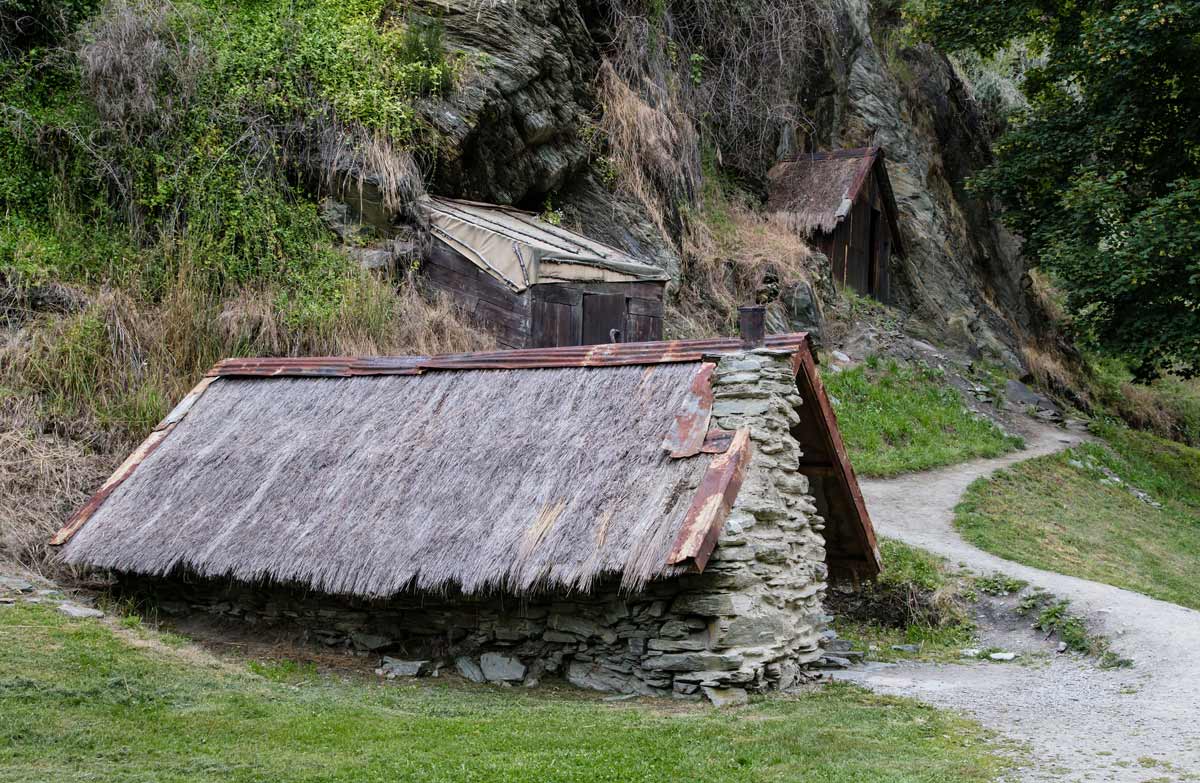 Looking at the huts you get a real sense of the harshness of their day-to-day lives.

In Arrowtown there were 60 Chinese, who were marginalised and kept separate from the European settlers. When they died they were buried in a small Chinese cemetery, or in unmarked graves outside the cemetery walls. They lived outside the town in crude huts, and they had a couple of supply/grocery stores and some gardens so, in effect, it was their own self-sufficient community. 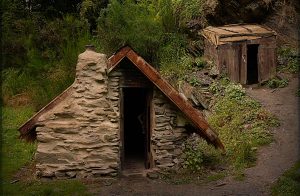 One man called Ah Lum had a famous store and was one of the few Chinese to earn respect from the Europeans, often acting as interpreter between the two, and once saving the life of a drowning man from the Shotover River. When Ah Lum died in 1926, the Chinese community seemed to disappear with him. Ah Lum’s Store was restored in 1986, and has since been designated a Category I Historic Place.

There were many many Chinese tourists visiting while we were there.

We rode on through the prestigious Millbrook Resort which kindly allowed the trail to go through their resort and the trail there is in excellent shape.We rode on towards Queenstown turning into Rutherford Road towards Lake Hayes. 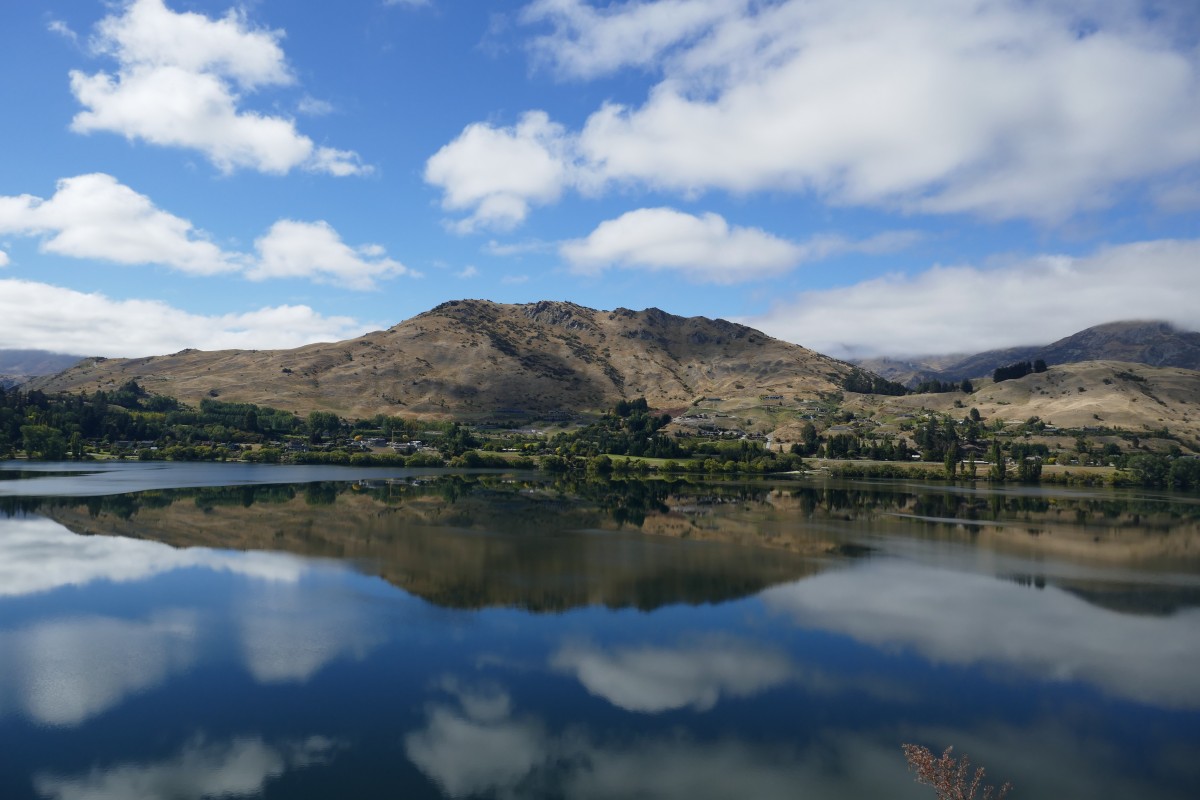 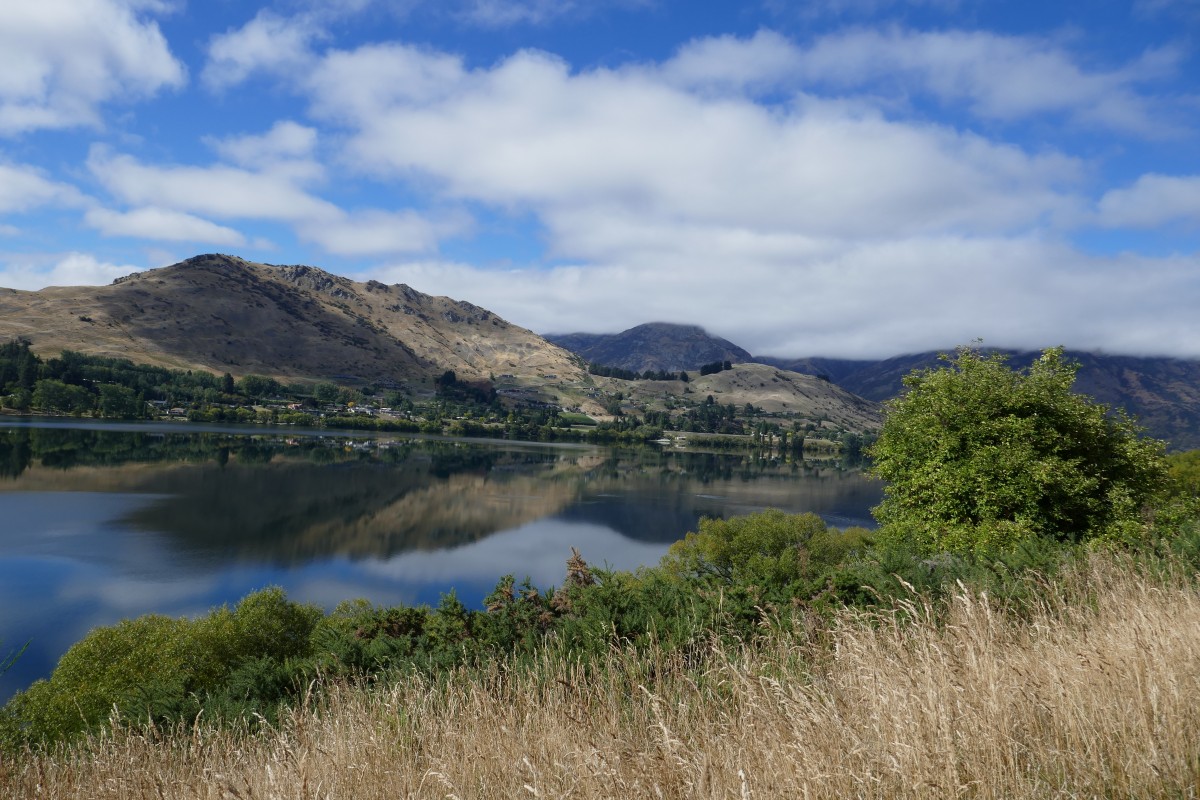 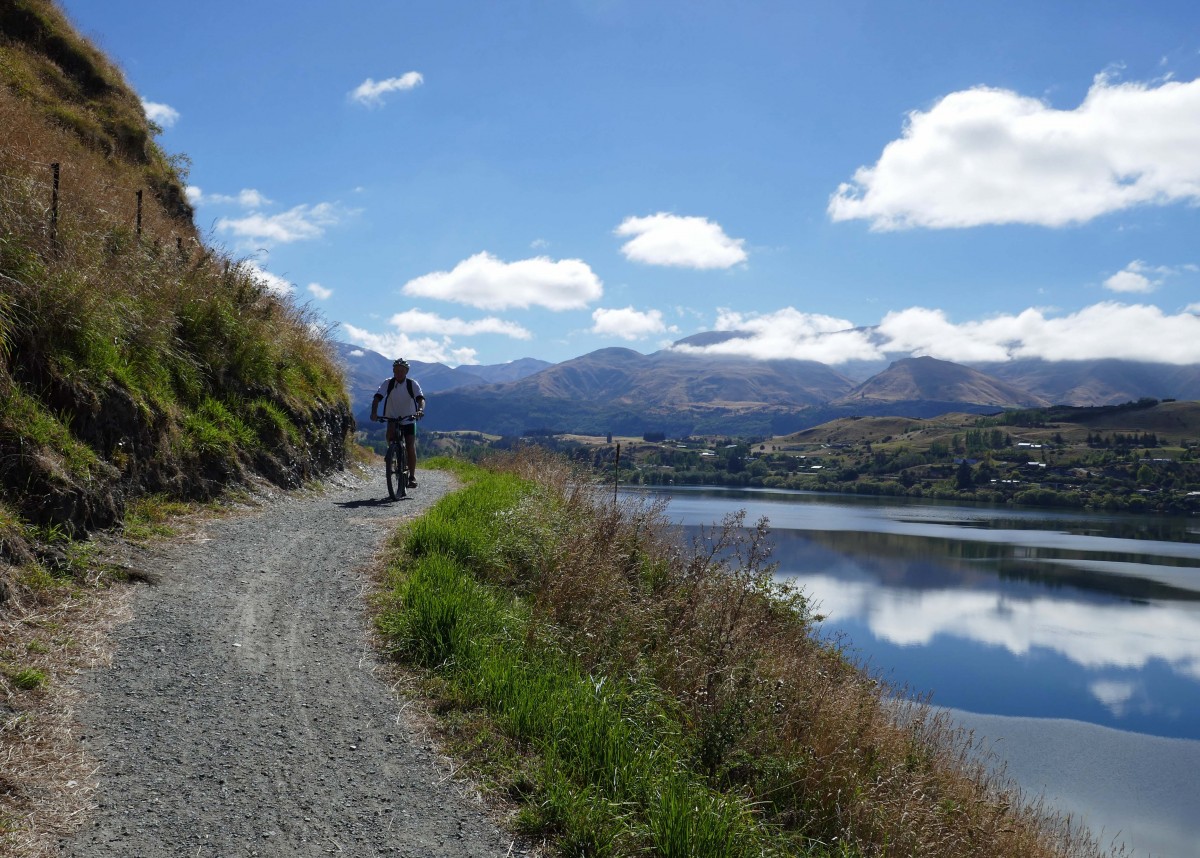 It was a stunning day by the time we reached Lake Hayes with unbelievable reflections of the mountain peaks in the lake. We rode anticlockwise around the lake and ended up on a hill near the entrance for our picnic lunch with stunning views over Lake Hayes. The trail was undulating with some short climbs which were eased by the amazing scenery around you!.  But you do need to keep your wits about you as the trail is narrow in some areas with a steep drops on one side and the odd cyclist coming the other way!

We then rode on to Queenstown via the Shotover river bridge with some incredible scenery along the way. and some of us ended up taking a short cut by the water care facility and back to our accommodation.

Another beautiful day but very cold early morning as we were again picked up by Around the Basin shuttles who again took us to Arrowtown  – this time to ride to Gibbston valley wineries.  Again Steve our driver gave us maps , advice and directions and arranged to meet us for pickup at Gibbston Tavern at 4pm.

Off to ‘Provisions’ cafe again for coffee before we began our easy day ride to Gibbston Valley – 15 kms plus some extra kilometres visiting other wineries. 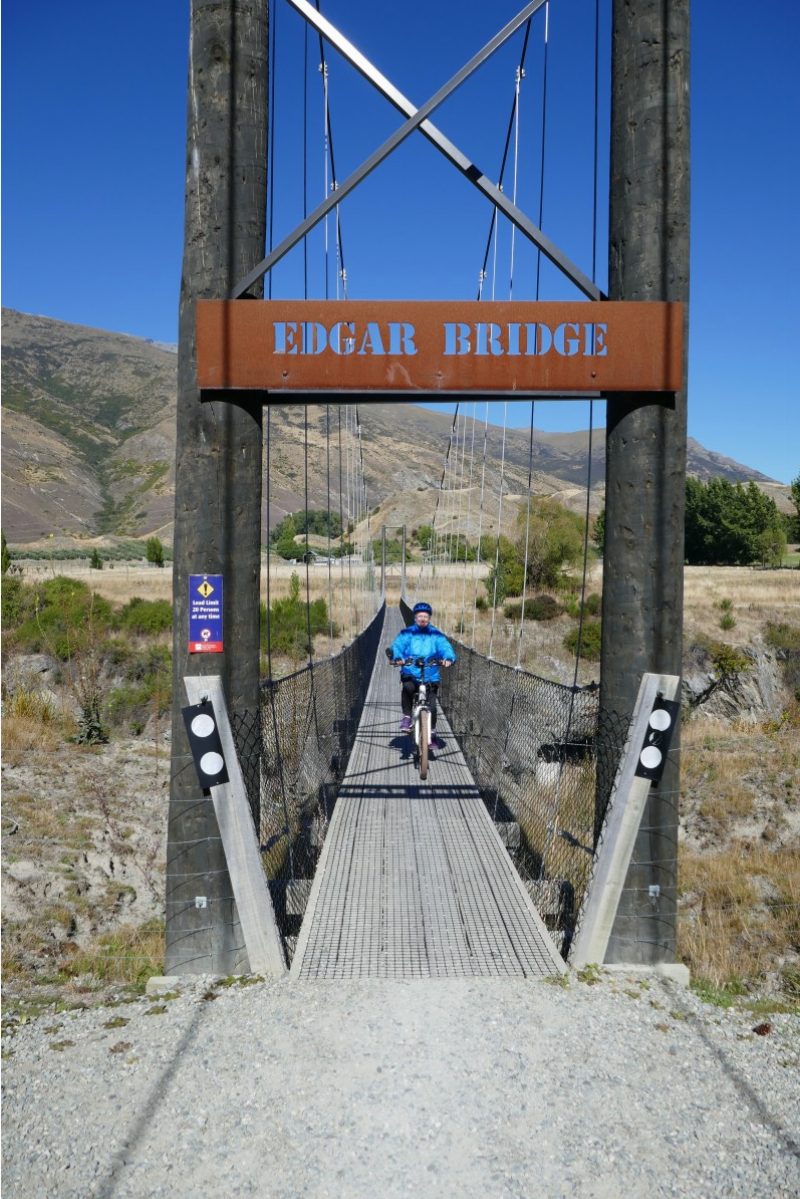 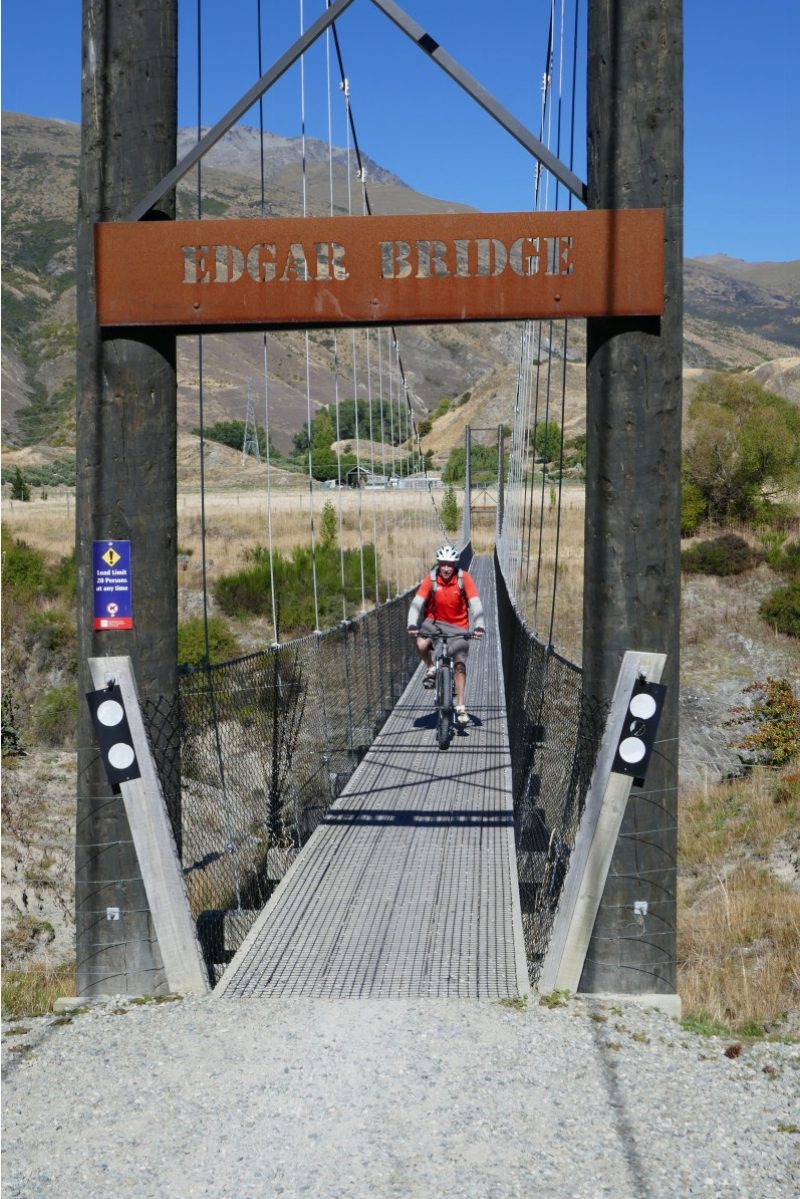 On our way we rode over several swing bridges – some were longer than others – the Edgar Bridge is not for the faint hearted or those with no head for heights!

Then on to the historic Kawarau bridge home to AJ Hackett Bungy Centre where AJ Hackett and Henry van Asch jumped into the World spotlight in 1988 when they launched the World’s first commercially operated Bungy Jumping from this site. What slick operation the bungy jumping is – it seems they can do over 200 jumps a day in high season…..at  $195 per adult, per jump. We watched several people throw their life in the air tied to a bungy rope…crazy, mad, not for $1,000,000 were thoughts that were voiced amongst us 70+ group!

The two E-bikes took a detour at this stage to visit Chard Farm Vineyards an old historic farm that is now a thriving vineyard. The famous Central Otago Dunstan Gold rush of 1862 lured Richard Chard from Dorset, England out to New Zealand.  He arrived at the tender age of 14 and worked in the Dunstan and Gibbston areas for several years before settling at the Morven Ferry end of the old coach road to Queenstown, a place that is now well known in the area as “Chard Farm”.  Chard started with a one-acre strip, enough to accommodate a vegetable plot and an orchard.  Richard milked a couple of cows, kept a few hens and became more interested in supplying the miners with food rather than the allurement of gold.  Slowly the farm grew to its current size of 50 acres as small plots were taken over.  The beautifully aspected farm and the qualities of the relatively frost free slopes and free draining soils were recognised early in the development of the Gibbston Valley and Wakatipu areas.  Richard Chard married Emily Green from Woodstock, England in 1884 and they had seven children, all of whom attended the local Gibbston School. 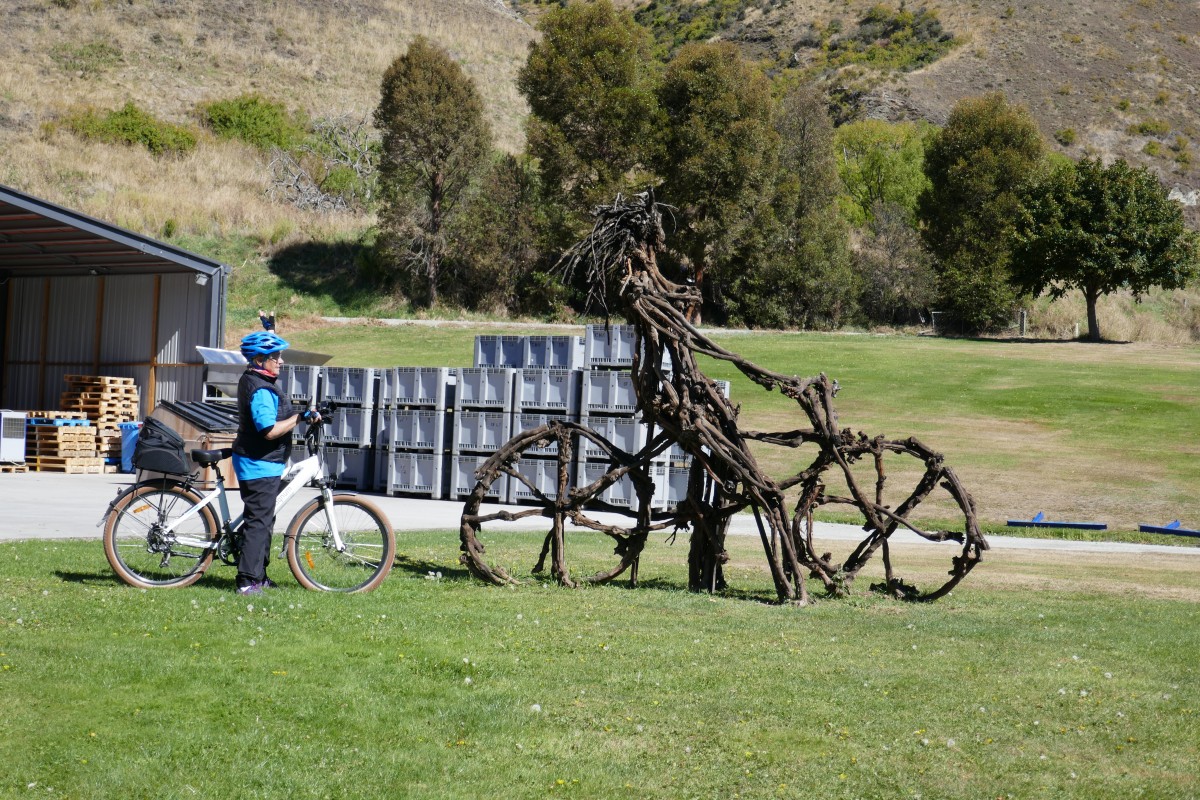 It is now owned by Rob Hay and extended family.  He arrived back in New Zealand in 1985 after studying winemaking in Germany for three years.  He spent the year searching for a piece of land in New Zealand that best emulated the conditions found in some of the greatest vineyard areas of the world.  He, with the help of his family, purchased Chard Farm in 1987 – it was the beginning of the Chard Farm Vineyard. 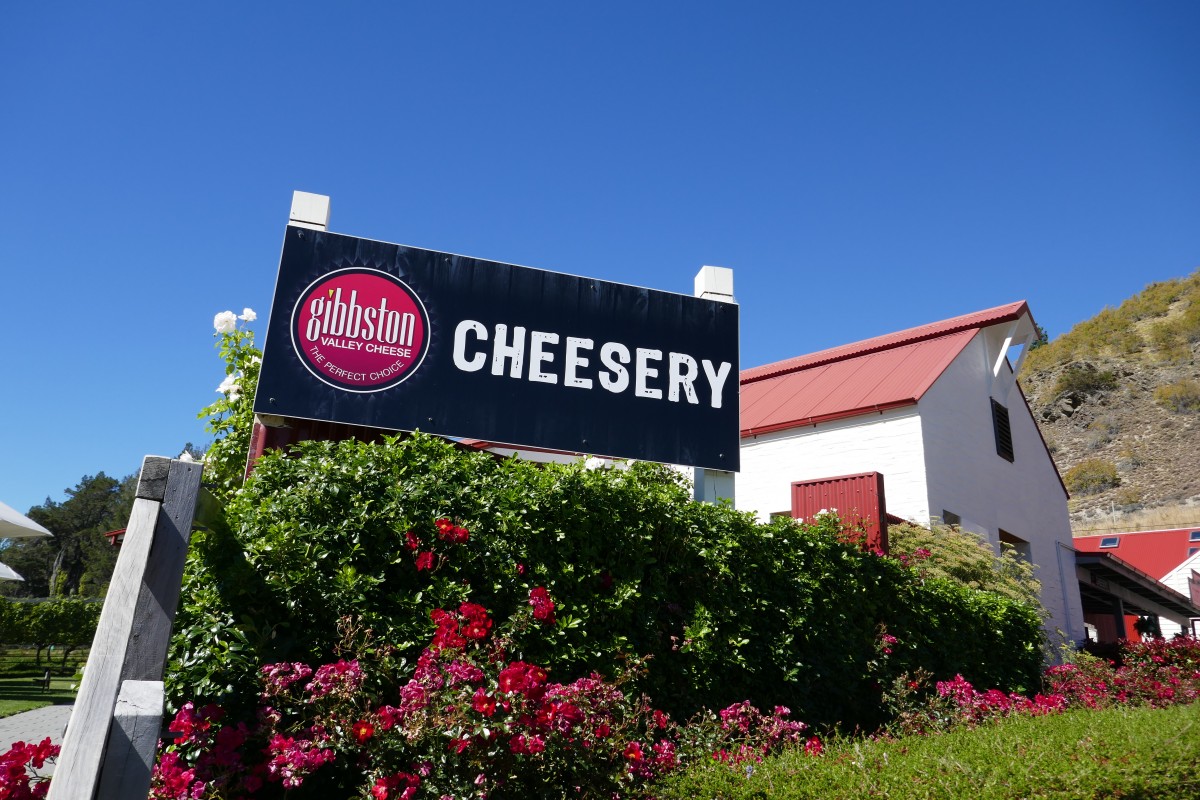 Next stop the Cheesery in Gibbston Valley winery for lunch and a little wine tasting after a truly memorable ride alongside the Kawarau River through the spectacular Kawarau Gorge. Riding alongside the deep blue Kawarau rive where the poplar trees were turning a beautiful golden colour. Along the way were wooden benches to sit and taken in the beauty of the river and the countryside. 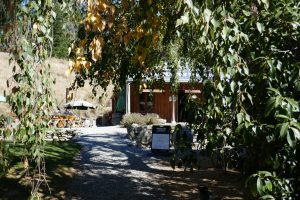 e circuit up to Mount Rosa and along an uphill track taking us back to the Tavern. 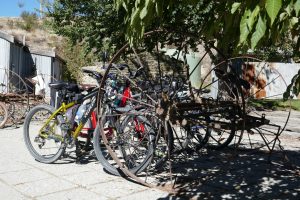 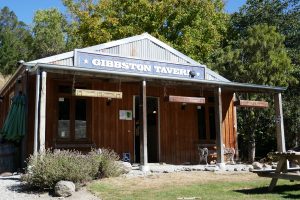 We rode past the stunning, international award-winning Peregrine Winery building. In spired by Peregrine (native falcon or Karearea) in flight, it has won awards from London-based Architecture Review magazine and the NZ Institute of Architects.

We stopped at Mt Rosa for wine tasting and liked their Pinot Gris!  Back to the Tavern where we were picked up and taken home!

Today we decided we would take a shuttle to the Morven Ferry Intersection where yesterday we split to head off to Gibbston Valley. Today we would ride back to our accommodation in Frankton via Thompson’s Hill and over the Shotover River. Our drop off was in the middle of nowhere so we could not start with a coffee but Steve told us about a coffee place at Lake Hayes Estate. 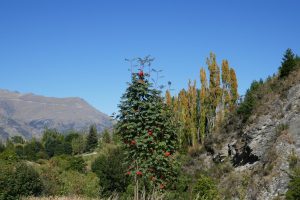 At the top of Thompson’s hill the longest and last hill on this ride, we stopped to admire the view across the Kawarau River up to the majestic Remarkables Mountain range. Every now and then the silence was broken by a jet boat racing up the river terrifying its passengers with boat ‘wheelies’!

This was probably the most challenging ride to date but the views were well worth it.

One can truly see the attraction of the Queenstown Arrowtown area for all tourists as there is something for everyone and amazing scenery for all.For more information about cycling in NZ  go to www.nzcycletrail.com