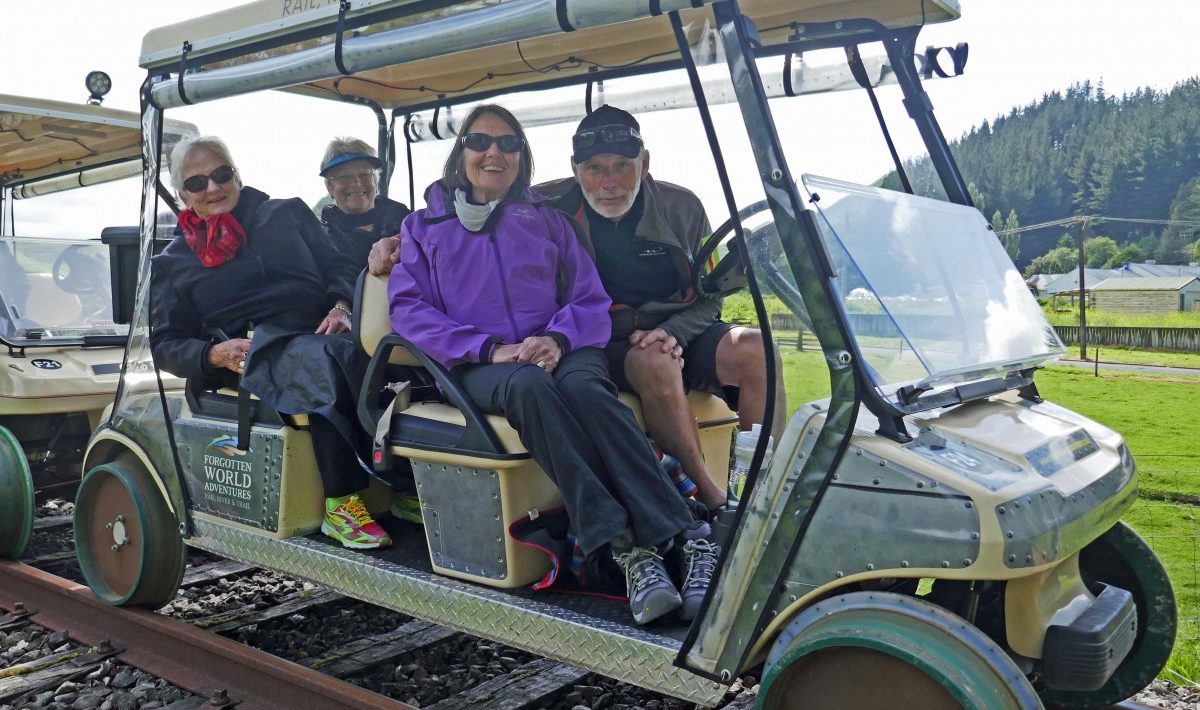 It was an exciting adventure ahead – a day in a golf cart riding through some forgotten back countryside of New Zealand.

It all started with an email from friends in Canada – telling us they were coming back to New Zealand and would love to ‘Ride the Rails’ in Taranaki.  Their dates and time were dictated by flights and other commitments so pretty limited.  As a result we booked the only package available according to the internet site on the day we planned to be in Taumarunui – that was a 5 tunnel rail cart ride. A little disappointed (as we really wanted to do the 20 tunnel ride)  but still very keen we drove down from Auckland to Taumarunui and arrived at the Forgotten World Motel a very comfortable home for the next two nights at around 4pm.  The cheery person on the desk suggested we may be able to upgrade to a 20 tunnel ride after we told her how disappointed we were that there was only the 5 tunnel ride available tomorrow.  Could we wait a few minutes and she would make some calls?   Five minutes later we were booked for 0730 am on the 20 tunnel ride the following day – our excitement mounted.

These self- drive golf carts on rails were the brainchild of Ian Balme in 2010 after the closure of the line in 2009. It was  an old disused railway which meandered through historical areas in Taranaki and inspiration dawned – he could get tourists to come to this part of New Zealand.  He and his partners had a busy two years as there was much work to be done and red tape & hoops to jump through to be able to lease the railway and land.  But persistence and hard work paid off as in October 2012 Forgotten World Adventures was born.

We woke up to a beautiful clear sky and warm day.  Having eaten a hearty breakfast we headed for the foyer for our talk about how the day would pan out and also the do’s and dont’s of today’s adventure. We were told to take warm gear and good footwear as the tunnels were mighty cold.

Following our talk 18 of us were escorted into two waiting minibuses to take us to the start of the railway track at Okahukura 12 km outside Taumarunui. 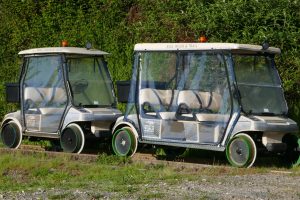 When we arrived the carts were all set up ready to go. We ventured over to try our legs on the rail bike that uses peddle power instead of petrol to move it along.  I was more than happy to sit in the comfortable carts and drive along ourselves.  We were shown how to drive the golf carts, what speed to go at and what distance to stay behind the cart in front.  Our guide for the day – Michelle, was a breath of fresh air and turned out to be fun, knowledgeable and caring.  She demonstrated hand signals for ‘slow down’ and ‘stop’.  In each cart there was a Rail Travellers’ Guide and a few blankets which we were very pleased to have as we went from one cold tunnel to another barely getting time to warm up in between.

The railway we were riding was built after a large deposit of coal was found in the area. Commenced in 1901, opened in 1932 and finally closed after a huge derailment that was too costly to repair in 2009.   There are 24 tunnels in the 142 km stretch of rail – one of the most expensive railway line laid in NZ.  All the labourers had to work with were picks, spades and wheelbarrows.

Our first tunnel was the longest at 1525m (and said to be the 9th longest tunnel in the southern hemisphere)  and just as we had been warned – it was cold!  We were very glad of our warm gear and the insulated blanket provided!  However, Michelle insisted we stop in the middle of the tunnel, turn out our lights and experience the blackness of the tunnel  – what a spooky, disconnected feeling that was.  We could see nothing and all had the feeling of being disorientated – how did those labourers survive…

The first hour rattles along through farmland with glimpses of Mt Taranaki in the distance.  Cows on one side and sheep on the other all looking pretty bored with the passing train! After all its a sight they see every day.

The rail then takes us through stunning countryside – remote, undulating, green and beautiful -then native bush and sub-tropical rainforests and stopping many time along the way.  At each stop there were information boards, with various artistic touches and sculptures to grab our interest and old photographs depicting how it was back then.  Michelle filled in the gaps with a low key kiwi sense of humour and offered on several occasion to take photos with peoples own cameras.  The stops that once had thriving community now has sheep, goats and cattle grazing in the field with little evidence that anyone had lived there.

There were many Māori settlements in this area long before the Europeans arrived to farm here and many Māori walking tracks from the Taranaki coast to Taumarunui. 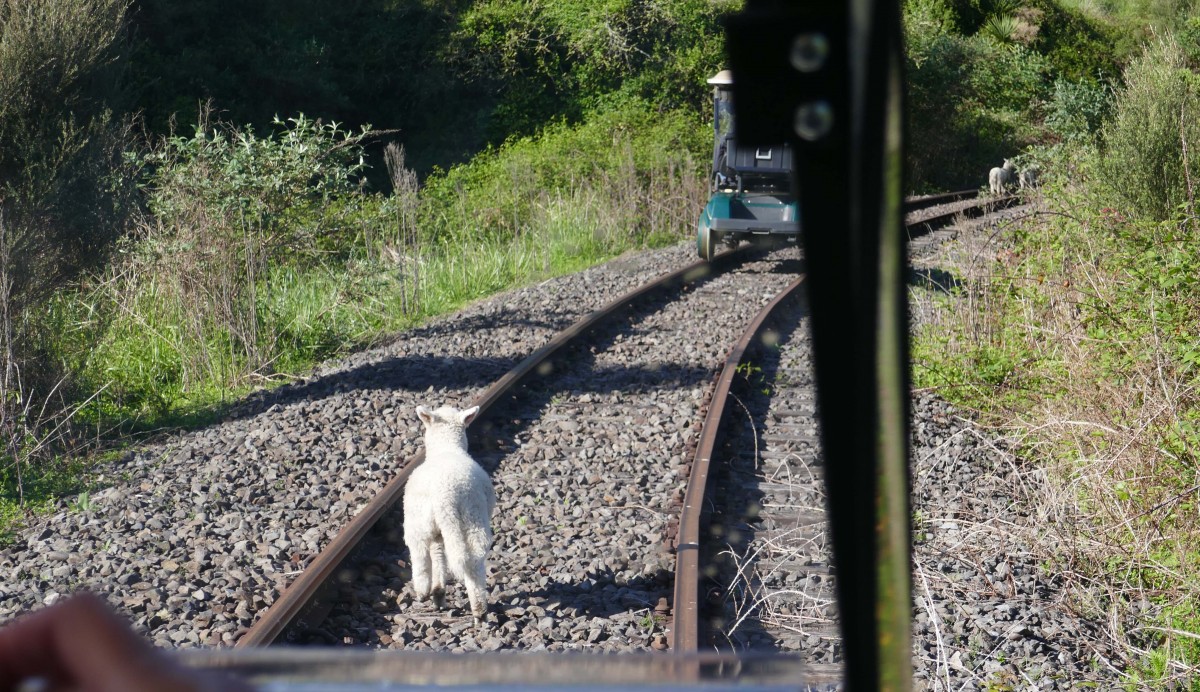 Another regular sight along the track were old abandoned trucks and cars left to rust away, some unique toilets and the odd deserted shack. We also had many unscheduled stops  for lambs, sheep, deer and goats running across the track or farmers moving their stock across the railway. 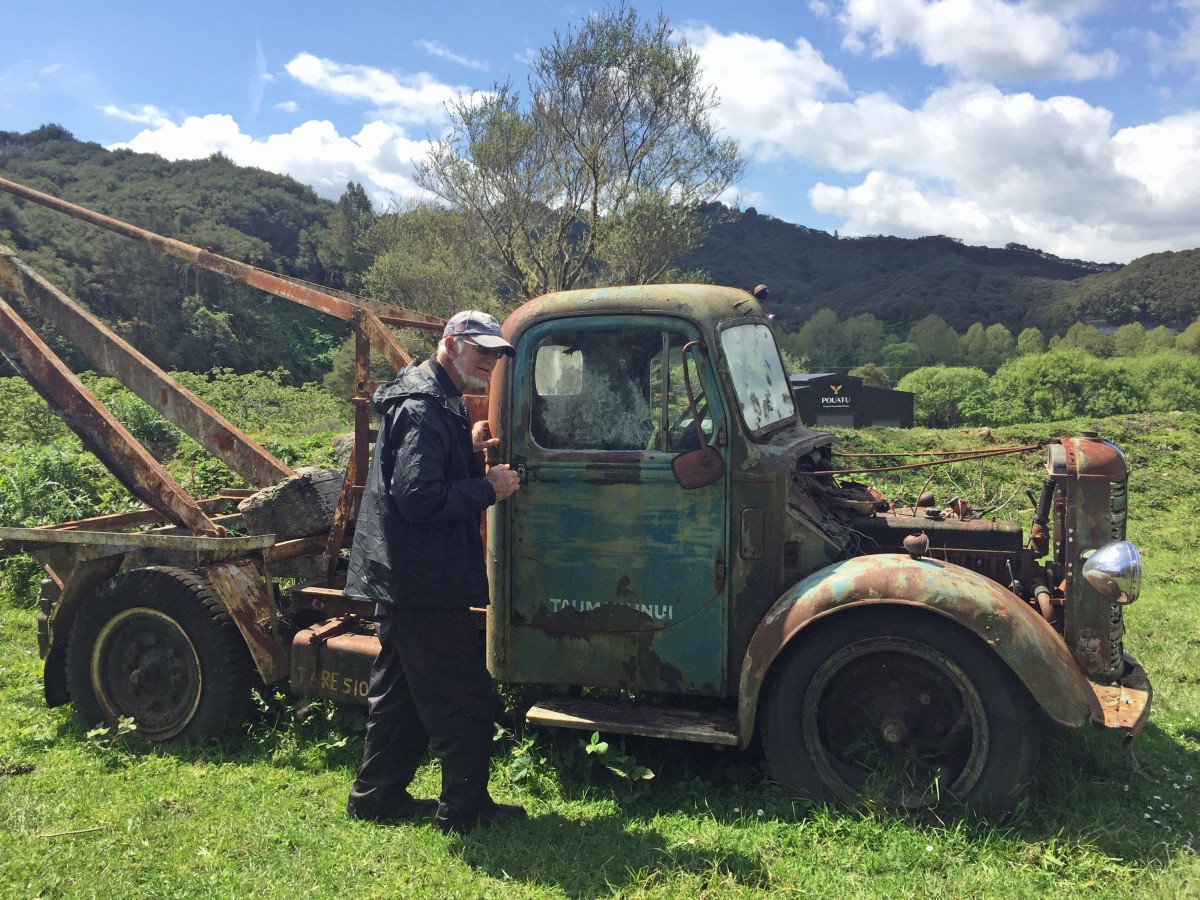 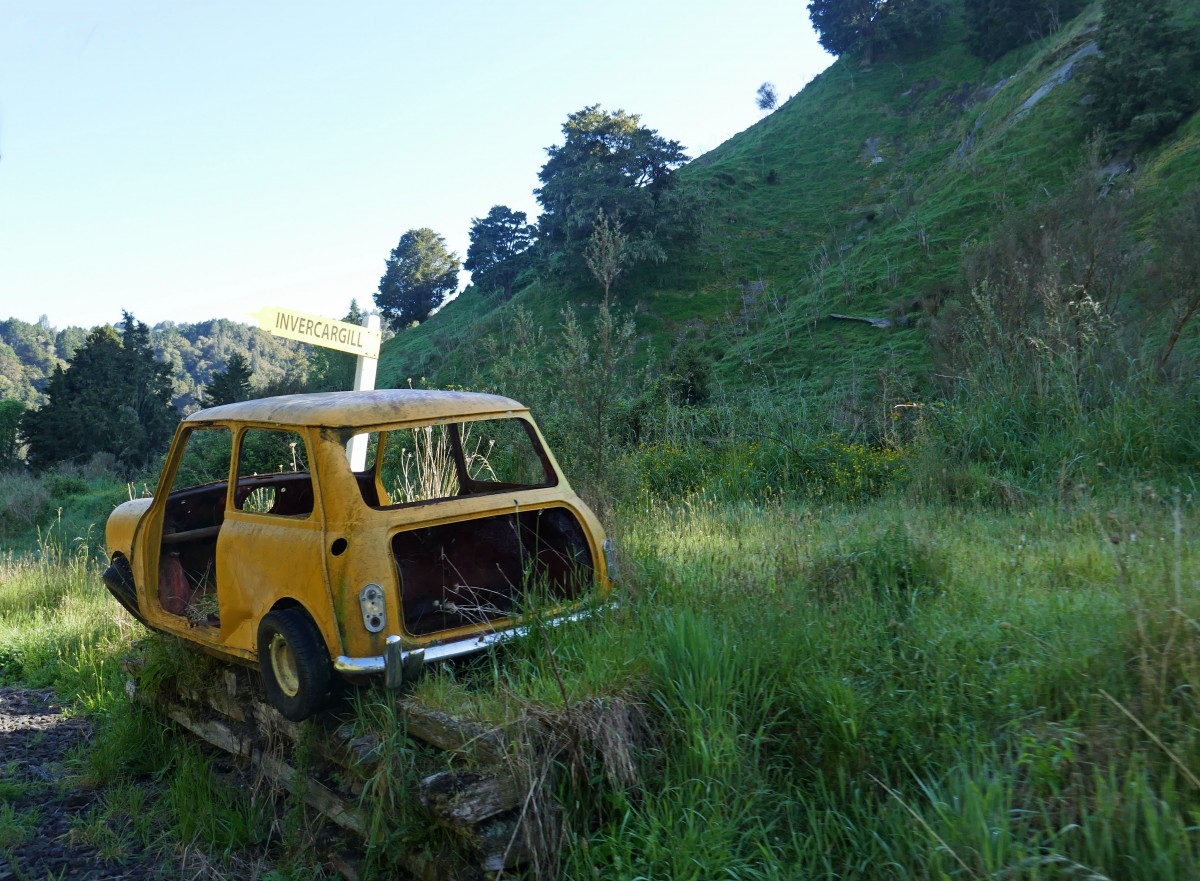 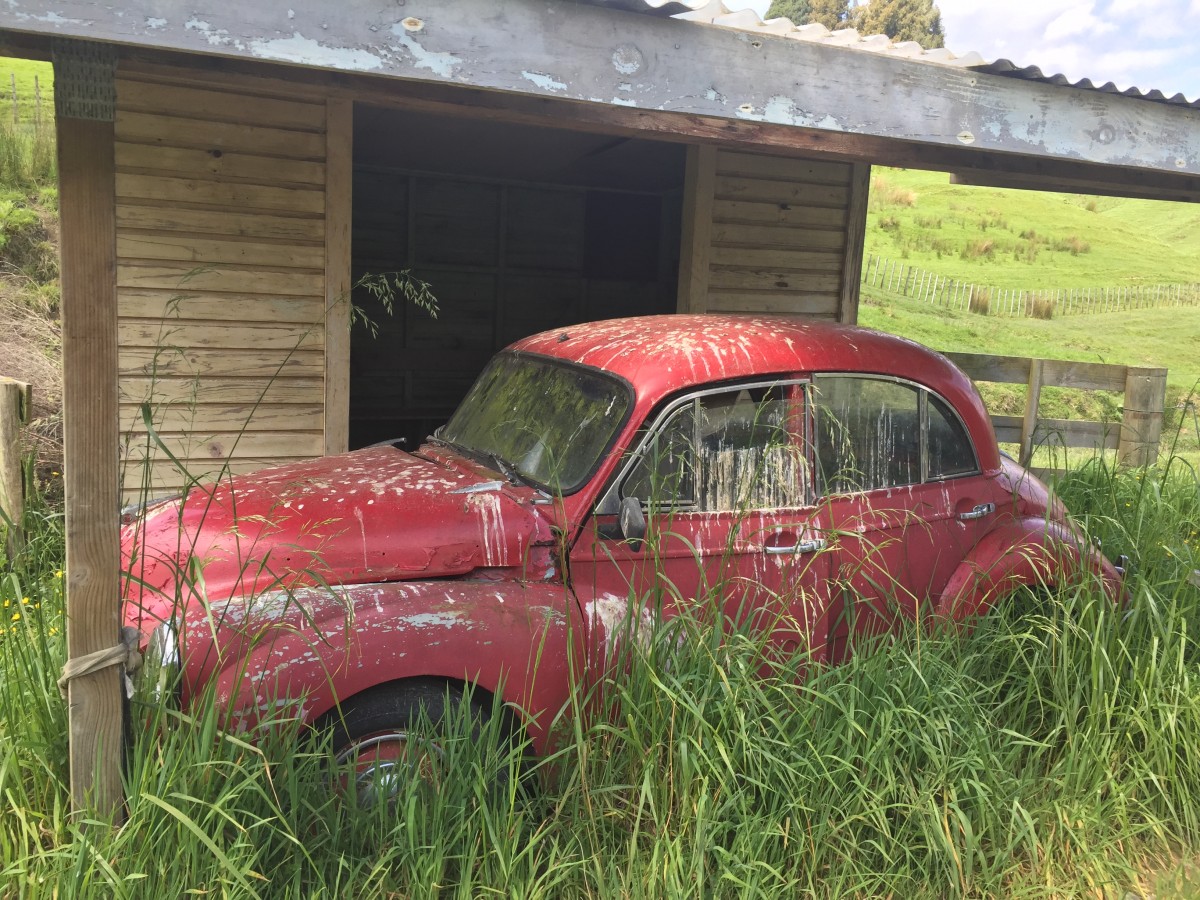 At one stage we stopped to clear stones from the railway line to avoid derailment.  Michelle did this ably with a shovel – one of the many pieces of emergency equipment she had in her lead cart. All great fun and great photo opportunities.

One of our first stops was Matiere, which has managed to survive as a village with its own school and local farming community. Here we had tea, coffee and home baking. The main hall was the spot for those who wanted a comfort stop as these are few and far between along the track.

Next stop Ohura which once had been a miner’s hostel, then was converted to Ohura Prison in 1972 but was closed in 2005 because staff did not want to live in such a remote area. But all was not lost as the buildings are now a popular B&B called Ohura State Prison B&B

Coal mining was a big industry in this area from 1930-1960’s – the coal was carried in buckets on an aerial ropeway from the mine to the station at Mangaparo. 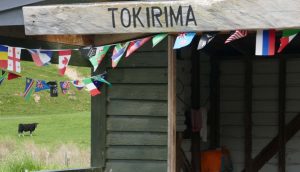 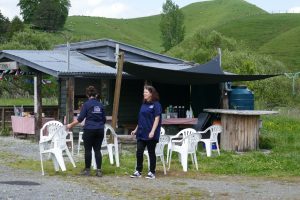 Served willingly by the team from Forgotten World Adventures (FWA). Tokirima is another  rural settlement with its own school that had some trouble recruiting a principle because ‘maybe they were considered to be out in the sticks’ a parent said.

Finally, at about 4pm we arrive in the Republic of Whangamomona We disembarked and wandered down to the pub for a well deserved wine & beer.  The atmosphere in the pub was electric – filled with tourists and locals alike.  You can tell the locals – in stocking feet or bare feet leaving their dirty boots outside!

Whangamomona declared itself a republic in 1989 rather than move from Taranaki region to the King Country after regional council boundaries were changed the main reason was probably because they had been arch enemies in local rugby challenges.  They have an election every two years and have had ‘Billy’ the goat and a poodle as past president. The pub/hotel is referred to as the ‘home’ of the republic.

After about an hour we all climbed into the mini bus for the 2 hour ride back to Taumarunui  with more local knowledge imparted from the cheery Michelle.  It was a long day but what a day! 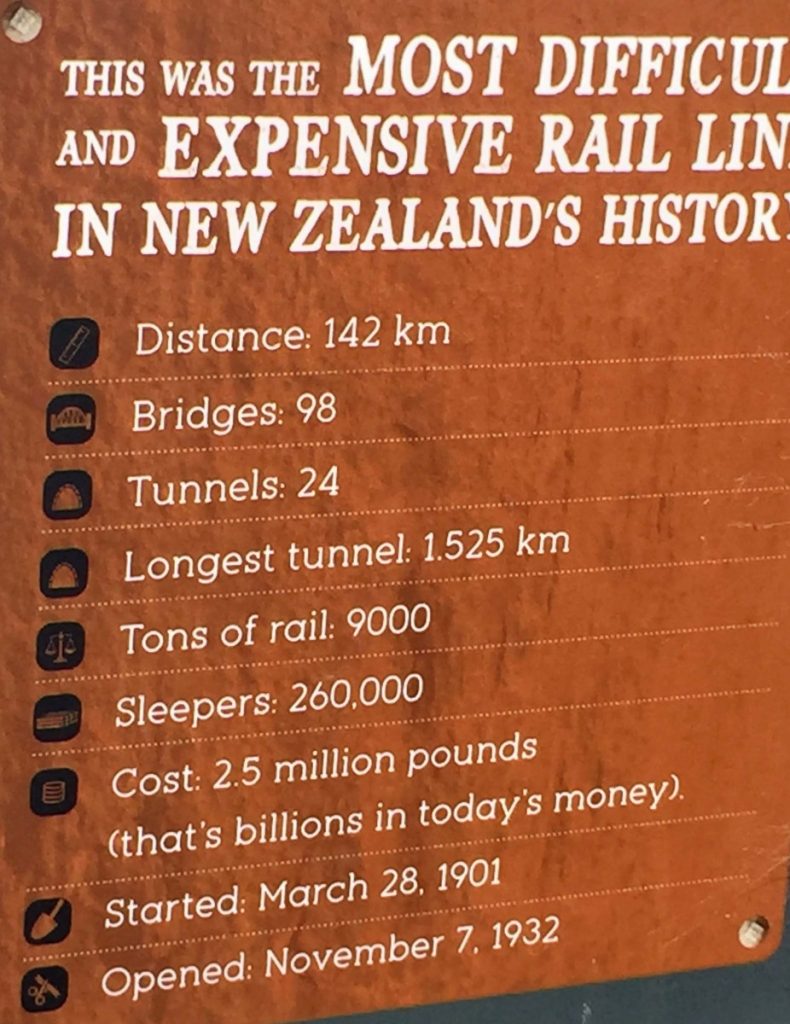