We were very sad to leave behind the remoteness of the Timber Trail and Blackfern Lodge (see previous blog) but there were compensations at our next stop – the city of Rotorua has lots of cafes where we can get a good latte and flat white!!

We had booked 5 log cabins at Rotorua Thermal Holiday Park which was about 3kms outside Rotorua but was close to the Te Are Ahi thermal trail.  Te Are Ahi means the Pathway of fire….should we be worried?

The holiday Park had just about everything to keep a person happy, clean and cosy log cabins, cafe, lock up bike shed, a bike cleaning unit, thermal pools and very helpful staff.  It is beside the Toi Ohomai Institute of Technology and often caters for student accommodation needs.  The Holiday Park is in fact owned by the institute of Technology but this may change soon as there is a council proposal to return the land around the Holiday Park to the local Ngati Whakaue.

Our plan for Day One was to cycle from the i-SITE in CBD, Rotorua to Waimangu Volcanic Valley approximately 30 kms.  Cycling one way was perfect but we also needed to get back to our accommodation so we decided that three cars with drivers would drive to Waimangu and park there and a fourth car and driver would follow and bring all three drivers back to start the bike ride.

There was division in the camp about which way to go – as we were three kms from city – would we go into the lakefront and then back out to Waimangu or go straight there and go into town on the way back. Whichever way it added 5 kms to the ride.

Seven of our team opted to ride first to Waimangu but Marcia and I decided we would head into the town first and start the ride from CBD.  We both had cycled around Rotorua before and just love riding through the thermal areas.

Just opposite the Thermal Holiday Park on Old Taupo Road and the bike trail there are two busy roads but the local council have made it easy for bikies to cross to the bike path via new underground path/cycleways.

We all set off together via the underground pathways and then waved good bye as we went our seperate ways!

Marcia & I followed the cycle path along Hwy 30 past Geothermal valley and Maori village.  We turned right into Froude St following it until it met Sala street.  A couple of hundred meters along Sala street we picked up the bike trail again – this bit of cycle trail is not very well signposted.

This was the start of the ‘off road’ cycling alongside the Puarenga Stream and under Te Ngae Road.  Leaving the stream we headed towards the surface of the moon!!  That is what is felt like riding through the the grey silica flats with steam rising from vents all over the surface.  We stopped to examine the yellow crystallised sulphur on the rocks that sat in piles on top of the silica. 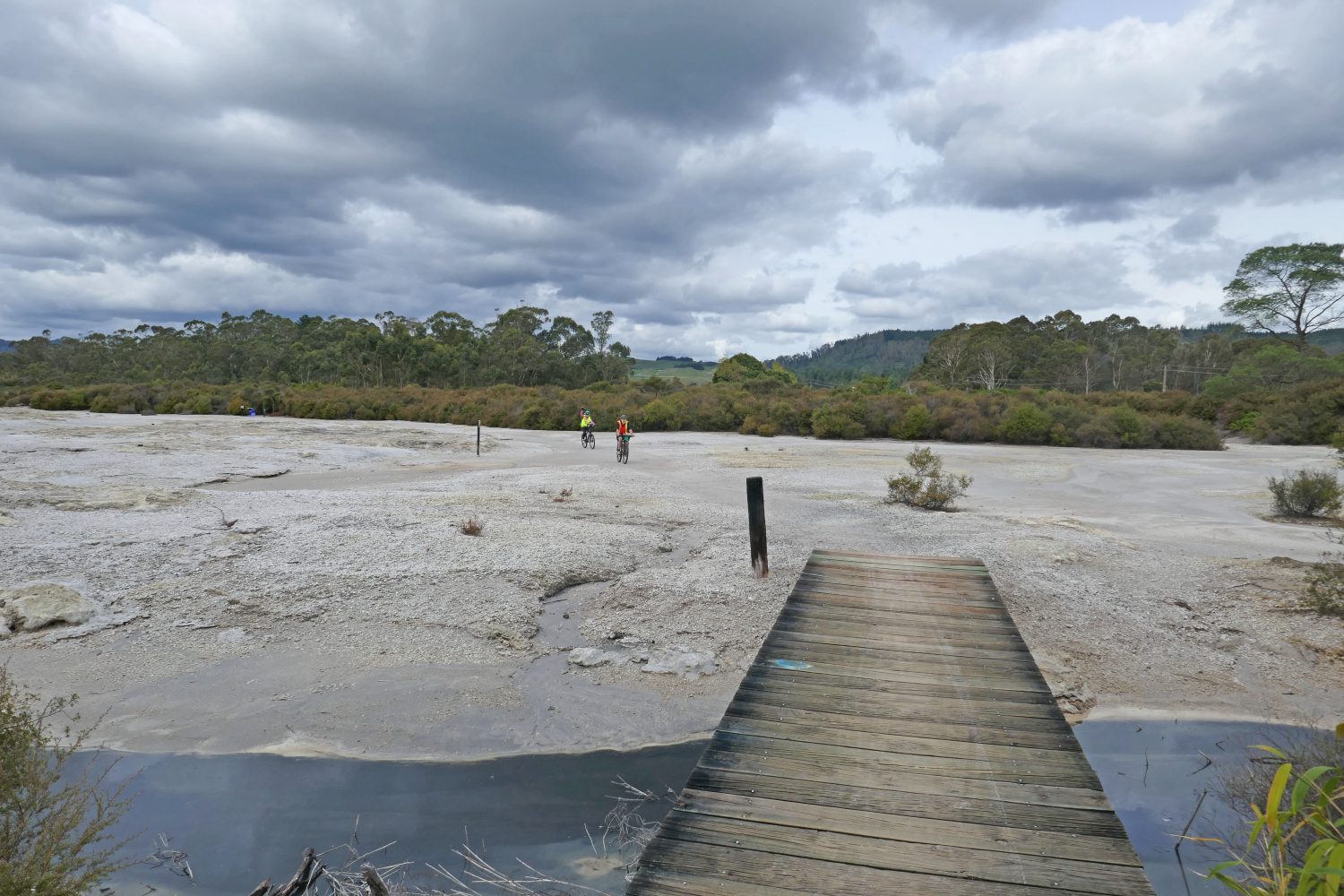 Our next stop was at Camerons Laughing gas pool which in 1931 was described as “a hot pool, the gases emitted from which banished the deepest gloom in peal after peal of uncontrollable laughter”. The gasses emitted are a mix of hydrogen sulphide & carbon dioxide which we mortals call laughing gas or Nitrous Oxide used by midwives for women in labour which of course we know is no laughing matter!!

On we rode around Sulphur bay pass the famous Polynesian Pools passing sloppy, murky bubbling brown mud pools one of which was called “The Coffee Pot’ which plopped and gurgled as we passed it. Locals tell the story that people tied themselves by rope to the Manuka bushes and lowered themselves into this brown murky liquid as it was a thermal attraction with healing powers. We did not try that trick or stop for coffee as there were many notices warning us to stay on the designated path!

We then crossed to Hatupatu Dr and headed towards Sulphur point but stopped to enjoy the spectacle of black-backed, black-billed and red billed gulls nesting at Rocky Point, a small silica inlet,  which is part of a wildlife reserve and of particular interest because gulls are not usually found in geothermal areas. The black-billed gulls are only found in New Zealand and are, according to ‘New Zealand Birds Online’ “one of the most threatened gull species in the world”.

This inlet is part of the Sulphur Point Wildlife Sanctuary which is home to an amazing number of wading birds such as the endangered New Zealand dabchick, banded dotterel as well as the black-billed gull plus more common birds such as the scaup, shag, pied stilt and Caspian tern. This sanctuary achieved  refuge status for wildlife in 1967.

The bay is a sulphurous area lying on top of a geothermal field  and the colour of the water around the area is a milky white because of its unique ecological makeup due to sulphur particles suspended in the water. The area around Motutara Point is a refuge for all birds as the warmth of the water and environmental conditions create a bird spa.

Off the Motutara Peninsula  just by the boat ramp are Timanga and Moturere Islands. Timanga Island was once home to several families who lived on it but little of it is visible today. Moturere Island was once a geothermal bath used for treating many illnesses and is now the bigger of the two islands and home to roosting and nesting birds. We stopped to watch the array of birds coming and going on this tiny island. There were a couple of kayakers paddling around – as motorised boats are not allowed into the refuge area kayaking is a great way to get close!

From Motutara Point you can also see Mokoia island in the middle of Lake Rotorua and is at the centre of a beautiful love story between Tutanekai and Hinemoa who were forbidden to meet but she swam to her lover on the island.  It is now a wildlife refuge.

There were just so many things to see and do along this trail that riding a bike takes a back seat. There is also an amazing invention floating just off Motutara point  – a man made island launched in 2012.  It is the size of a football field (5000sq m) and was constructed from half a million plastic soft drink bottles specially treated and covered with fibre matting which had plants which were sourced locally sewn into it. This floating island is moored just by the point and can be moved to other areas.  It is believed to be the world largest man made floating wetland.

Research indicates that the floating island will ‘remove up to four tonnes of nitrogen and more than 1000kg of phosphorus from the lake every year’. It also acts as a navigation tool for airplanes as it was constructed to spell out the word “Rotorua” in giant floating letters.

After leaving the point we stayed by the lakeside but rode through kanuka & manuka trees which lined the track all the way to the Lakefront where the water was black with swans and dabchicks all looking very content, many having been well fed by tourists!

As we got close to the Lakefront we passed the a beautifully carved waka called ‘Te Arawa Waka Taua’, built by hand in 1989 by local carver Lyonel Grant. It is constructed from totara wood, is approximately 20 metres in length and weighs approximately 2.5 tons.

We turned around at the lakefront and headed back the way we came, passing our accommodation and heading out towards Waimangu. This was a boring part of the ride as it was alongside a very busy highway until  we turned into Highlands Loop Road.  When we reached Waimangu Road our separate cycle path finished but it was downhill all the way to Waimangu Volcanic Valley where we all met and enjoyed a welcome cup of coffee at the cafe there.

Again – an agreeable division in the camp. Five members decided to drive back to Waimangu Volcanic Valley, this time with the bikes in tow and ride as far as Kerosene creek which was about 18-20kms out and same back.  The report back was that is was a lovely ride until the turn off to Kerosene creek where the path became so overgrown they were torn by briars and blackberry bushes and one person rode through grass that was so long it sent him off his bike.  David, one of our team, rang the council to complain but one wonders if that call resulted in any maintenance action.  But the view of Rainbow mountain more than compensated for their discomfort!

The rest of the group headed back into Rotorua along yesterday’s route and ended up riding up Lake Road to a cafe called Third Place Cafe where we enjoyed a great cup of coffee. From the window we could see the small historic Maori village of Ohinemutu and decided we would ride down to investigate.

Ohinemutu is home to the Ngāti Whakaue tribe, who gifted the land on which the city of Rotorua was built. Ngati Whakaue is a sub-tribe of the Te Arawa waka (canoe) which journeyed from the Pacific homeland of Hawaiiki to New Zealand around 1350AD. The location is beside Lake Rotorua and has active geothermal energy, used for cooking, bathing and heating.

There is a beautiful historic Tudor style church at the lake edge called St Faith’s Church built in 1914. Inside there are many Maori carvings and panels but the most beautiful aspect of the church for me was the window etched with the image of Jesus wearing a Maori cloak.  If you position yourself in the right spot he appears to be walking on water.

We all agreed it had once again been a very successful bike week and headed off to the ‘Wild Rice Thai’ for dinner to celebrate – a great place to eat if in Rotorua.

Our combined average age of 73.33 had survived – The Waikato Trails, The Timber Trails and the Rotorua Thermal Bike ride!  Bring on next year!!!