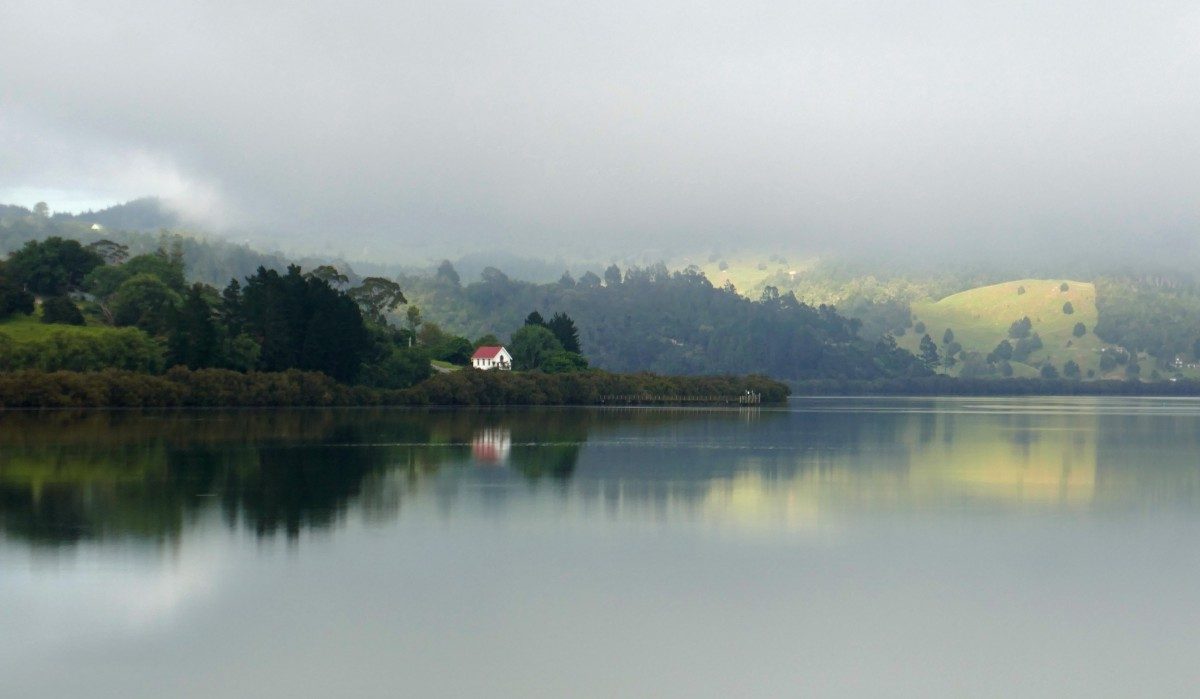 Our adventure began in Paihia, the main centre of the Bay of Islands and home to the Treaty of Waitangi House.  Russell which was the first permanent European settlement and sea port in New Zealand is just across the bay – a lot of history in this area.

We decided to stay there the night before our bike ride to show-off the Bay of Islands to our English visitor but sadly the weather had other ideas so we saw Paihia through dark clouds and rain.

Next morning the sun shone brightly as we set off to ride the 5 km to Opua where the Twin Coast Trail started.  We had not given much thought to this part of the trip – 5km – how hard could it be? But it was hard – it was nasty –  up and down several very steep hills along a narrow busy road with lots of traffic!

Finally we rode into Opua, the first port for overseas yachts arriving in the country after crossing the Pacific Ocean and past the busy ferry terminal, to the start of the Twin Coast Cycle trail. We were cruising along on a lovely flat surface on old railway track past the spectacular mangrove swamps when we came to an abrupt halt! The old 80m tunnel was ‘closed for repairs’, please take alternate route!

So off we headed up over this huge muddy hill (which was why the tunnel was built in the first place!).  Riding this alternate route was out of the question as the ground had deep channels that could bury you or your bike should you fall into them!

Once back on the old railway line again we were flying along surrounded by beautiful mangroves on both sides and lots of pohutukawa  trees with their bright red blooms  – we soon forgot about the unexpected detour.

We rode over the Taumarere Long Bridge and passed the railway station where Gabriel, the steam train had just discharged around 30 people onto the tracks for a talk about the history of the train and the area.  Gabriel is a 90 year old 4-4-0 Peckett side-tank engine and is the only one of her type left in the world and an iconic star attraction in Kawakawa.  It is not only used to haul passenger trains, but also for school trips and educational tours.

Today Gabriel travelled from Kawakawa to Taumarere bridge with lots of tourists.   Kawakawa is our  soon to be stop for well deserved coffee. After the bridge we had to ride alongside the train track as the track between here and Kawakawa  was and is  Gabriel’s patch. 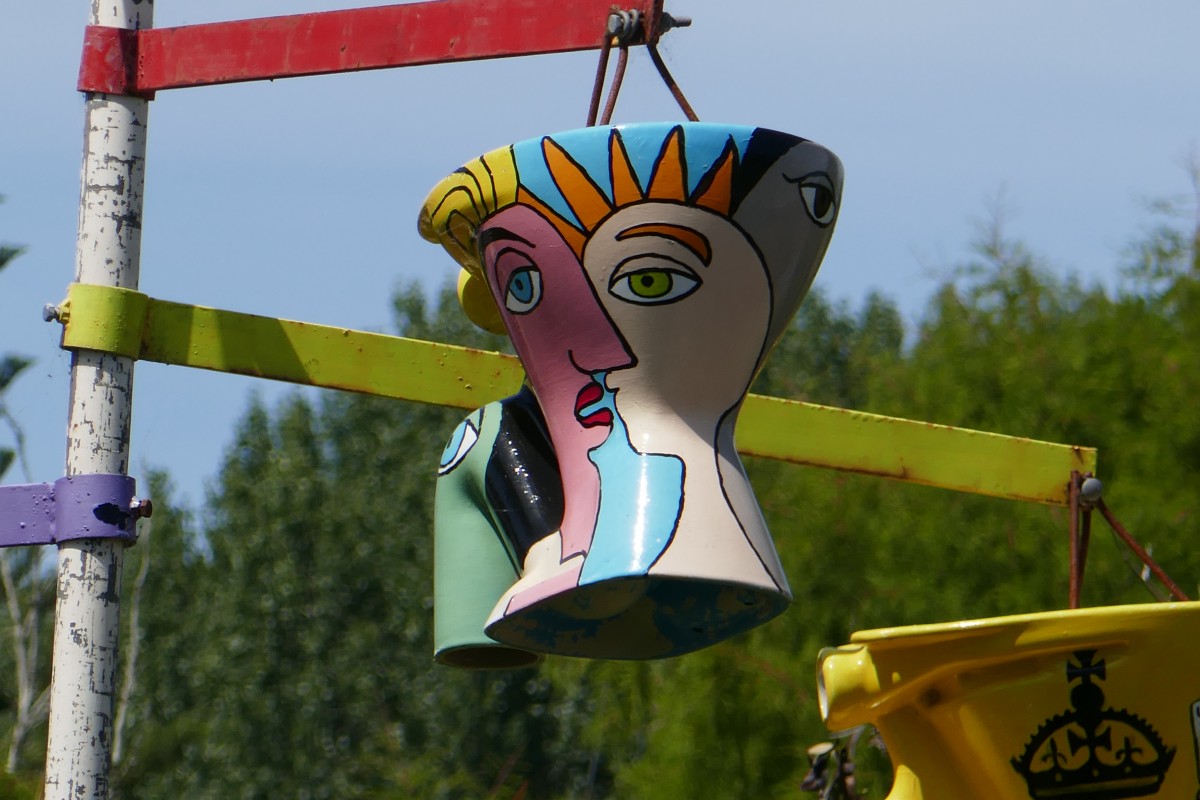 Arriving in Kawakawa we headed for one of the many coffee shops to quench our thirst and we picked the one on the main street opposite the infamous Hundertwasser toilet.  Most tourists to Kawakawa go there to enjoy the colourful and quirky tile and art work in these public toilets designed by Austrian artist Friedensreich Hundertwasser.  He visited New Zealand in the 1970s for an exhibition of his work and decided to make the country his second home and bought property near Kawakawa. In 1998 with the help of the community he transformed the town’s public toilets into a work of art.

The next part of the trail took us through several industrial sites, an old wood mill and the small town of Moerewa. It was a gradual climb to our destination Kaikohe. We negotiated many many gates along the way which slowed progress and some gates were at a height that makes pushing a bike with two pannier bags difficult.  But then we arrived at the beautiful Orauta Stream suspension bridge and waterfall near Otiria and all was forgiven.

Finally we arrive at Kaikohe, a sleepy town which claims to be the largest inland town in Northland. We were warmly welcomed by the relatively new owner of Mid North Motor Inn.  He found us a safe place for our bikes and told us where to go for something to eat. Sadly this did not prove easy because we had spent so much time talking about the day’s events and drinking wine we did not get around to thinking about dinner until after 7pm and the nearby RSA where we had planned to eat was closing.  So for the first time in 20 years I had MacDonald’s takeaways!!

The clouds had gathered overnight and just as we set off after a hearty breakfast it started to drizzle. We had packed our bags and left them for Rob, from Top Trail Hire to collect and take to our final destination Horeke. Next we checked that all had their head torch – as we were heading for a 80 meter curved railway tunnel. The rain continued and as we reached the highest point on the trail it was pelting down so hard there was no time to enjoy the views! We battled on to Okaihau 14 kms from Kaikohe where we had arrange a stop for coffee.  A mob of  drowned rats descended on Okaihau Village Cafe – the only cafe in this small rural town. As we arrived – the rain stopped and the sun came out and stayed out for the rest of the day –  beautiful.

We arrived at Lake Omapere, the centre of the local maori tribal area and once was historically an important source of food for the local maori people who valued the lake for its eels. But the pollution in the lake over yearshad nearly destroyed the eel life.

However, the now improved water quality in Lake Omapere and its only outlet, the Utakura River, has put tuna (eel) back on the menu at local marae.

We rode on through lush farmland leading to the notorious ‘switchbacks’ where we rode/slithered down some very steep grades but with amazing views if you could stop long enough to enjoy them! It was worth it because at the bottom of the switchbacks we were alongside the Utakura river where we found many beautiful spots to stop for lunch.

We did share the trail with birds, butterflies, goats, rabbits and cows but very few humans. The farmland was lush and we rode through beautiful native bush believing we were alone in the world – blissfully alone!

A few kms before we arrived in Horeke we reached the start of the 1200m boardwalk that took us through beautiful mangroves, what an amazing achievement to build this in the middle of nowhere making it a memorable end to a great ride. 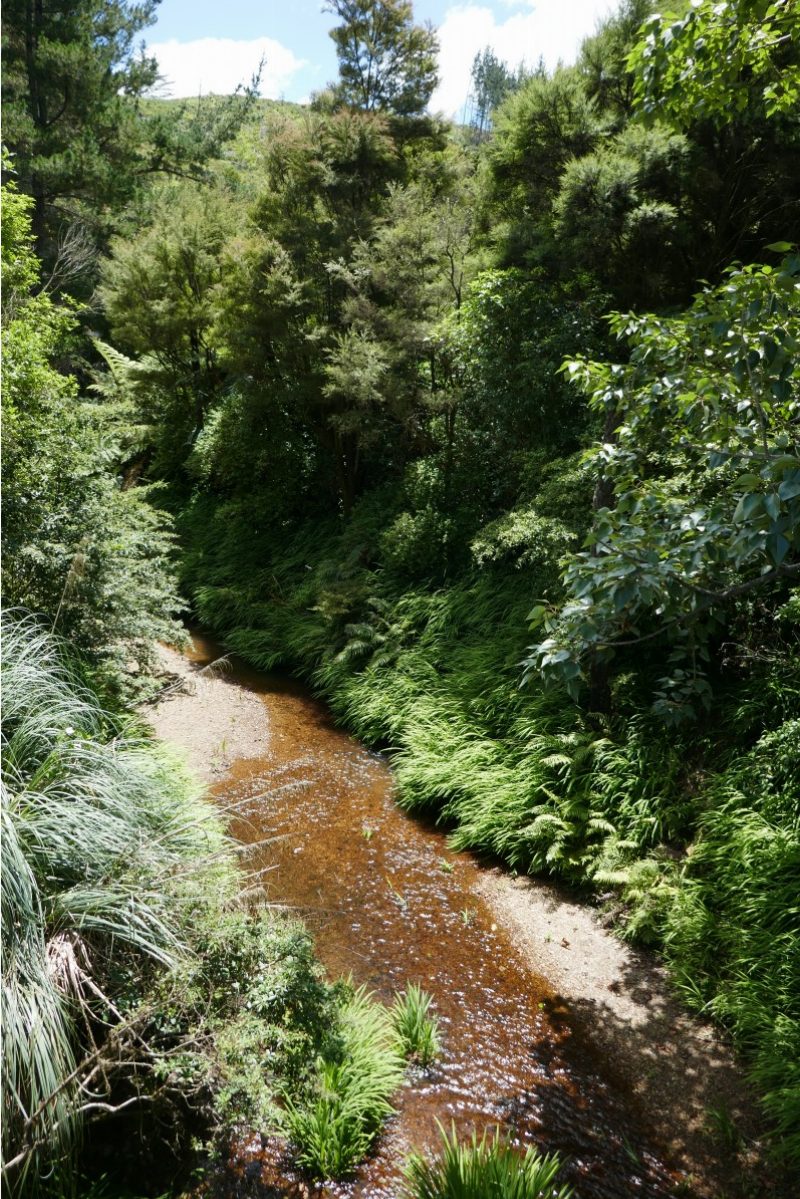 But wait! We were not at the end of the trail yet – it continued through the sleepy settlement of Horeke to Māngungu Mission House – 2 km past Horeke. The place started as a Wesleyan Mission station in 1882.

Following lengthy discussions, the largest signing of the Treaty of Waitangi in the country took place here, with over 70 chiefs adding their assent before a crowd of up to 3,000 people

Horeke Tavern, the first pub in NZ. Horeke settlement has lots of firsts – First commercial shipyard dating back to 1826 with a plaque erected to prove it. The infamous Cannibal Jack was the first pakeha settler in 1825.

The first government funded hui/meeting after Treaty of Waitangi was signed. The first murder trial in NZ. The first village postoffice and of course the first pub!  The pub serves great beer, wine and food – though a limited menu – the chowder is great!

We ate and drank at the pub and stayed in Horeke for thee days & nights at Riverhead Guesthouse sitting high on the hill overlooking the settlement of Horeke and the Hokianga Harbour.  We loved the three days there enjoying the surrounds. For more information about cycling in NZ  go to www.nzcycletrail.com

Just a couple of kilometers from Horeke is another hidden gem – the Wairere Boulders.  The boulders are a rock formation with a unique fluting on many of the large Basalt rocks. Most believe that the fluted striations in those dense rocks were caused by erosion from extremely acidic runoff caused by the vast kauri forests which once covered this area. However it was very hard to get geologists to believe this was basalt not limestone as fluting (according to them) is ‘not’ possible in basalt!  How wrong they were! 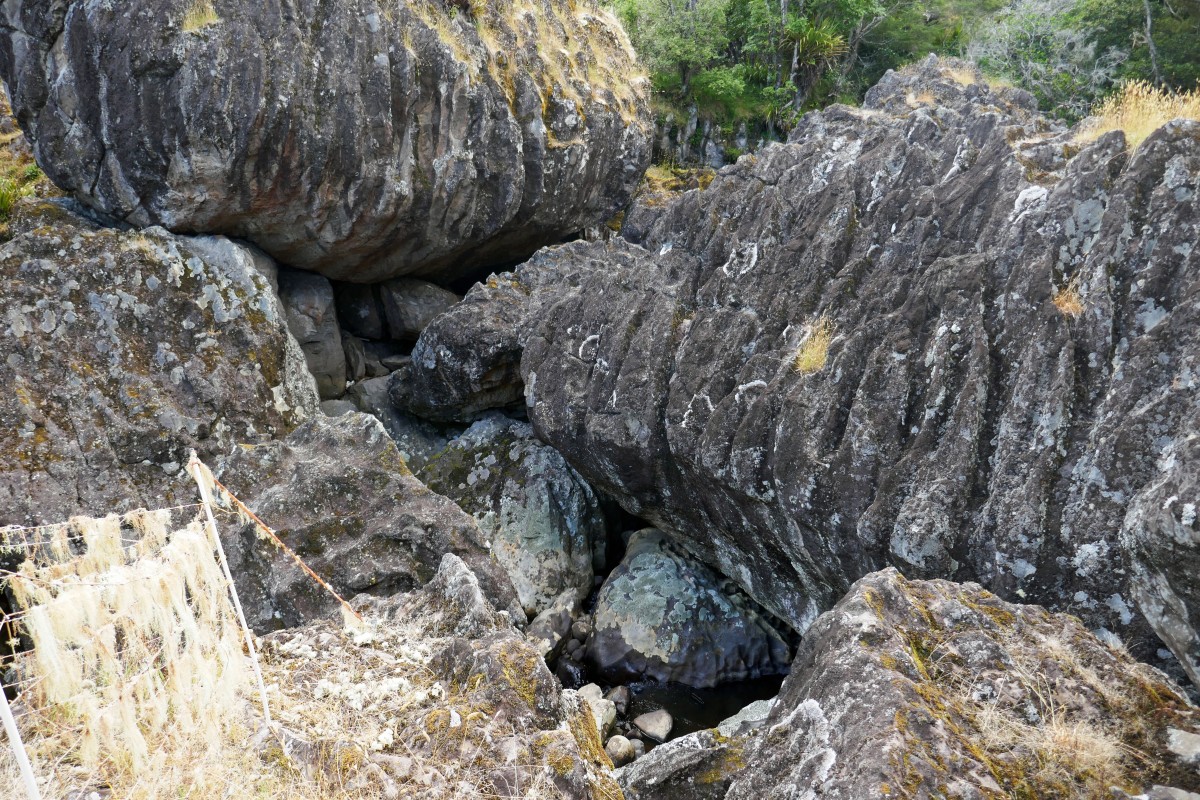 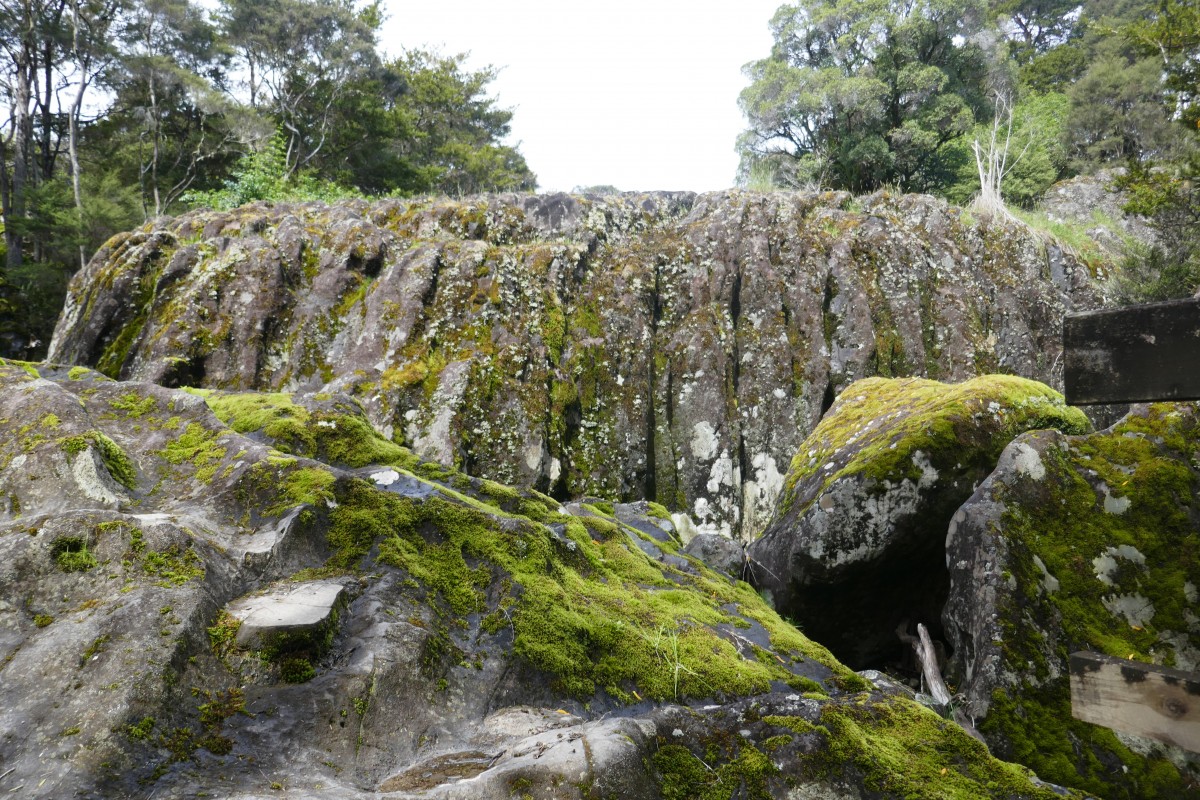 Most visitors just come to admire the remarkable shapes of the giant volcanic boulders, covered in moss and lichen that flows between the dense bush and to wander through the many walkways throughout the park.  The rocks were believed to have been thrown across the property by the eruption of Lake Omapere some 2.8 million years ago.

The pathways, steps, bridges and lookouts were all built by the original owners Felix & Rita Schaad who came to NZ from Switzerland in 1983.  Felix discovered the boulders while chasing a goat and had the foresight to see some tourist potential, so set about creating a geological nature park around the boulders. The idea germinated and planning began in 1999 then in 2000 Felix began construction of the walkways, bridges and steps and lookouts.  It was a very dangerous and labour intensive job and on many occasions Rita had to secure Felix with a rope, to make sure he did not disappear in one of the 30m deep gaps between the boulders. Most of the construction materials and tools had to be transported down to the valley floor by a flying fox. The park was opened to the public in 2003.

Today, one can walk under, over and even inside the boulders, admiring and touching the beautiful fluted shapes in basalt.  We walked around stroking the curved sculpted shapes and enjoying the tranquillity of the bush with its very active birdlife and pools that reflect the shapes of the rocks in the water.

In 2017 Felix & Rita sold the property and it was bought in December 2017 by a Scottish couple Graham & Paula Grant and their six children. They plan to continue the ecological work, serve coffee from a truck, take kayaking trips down the river and allow camping in camper vans on site.

This place is heaven and is a ‘must do’ if you go to the end of the Hokianga harbour to the little settlement of Horeke. 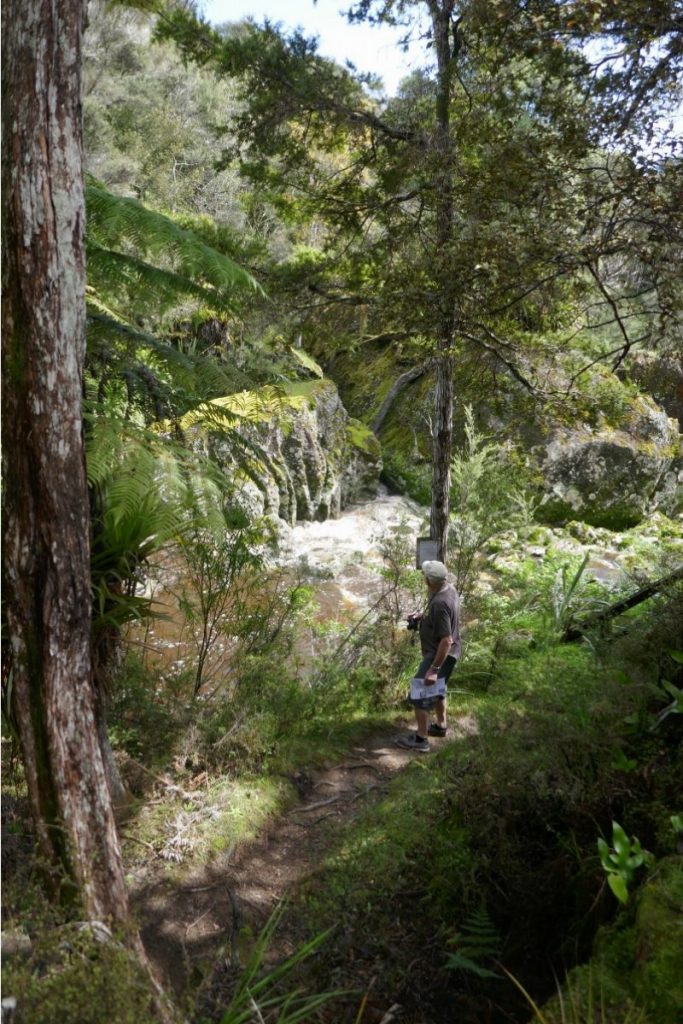 We were sad to leave this beautiful part of New Zealand but no doubt we will be back!