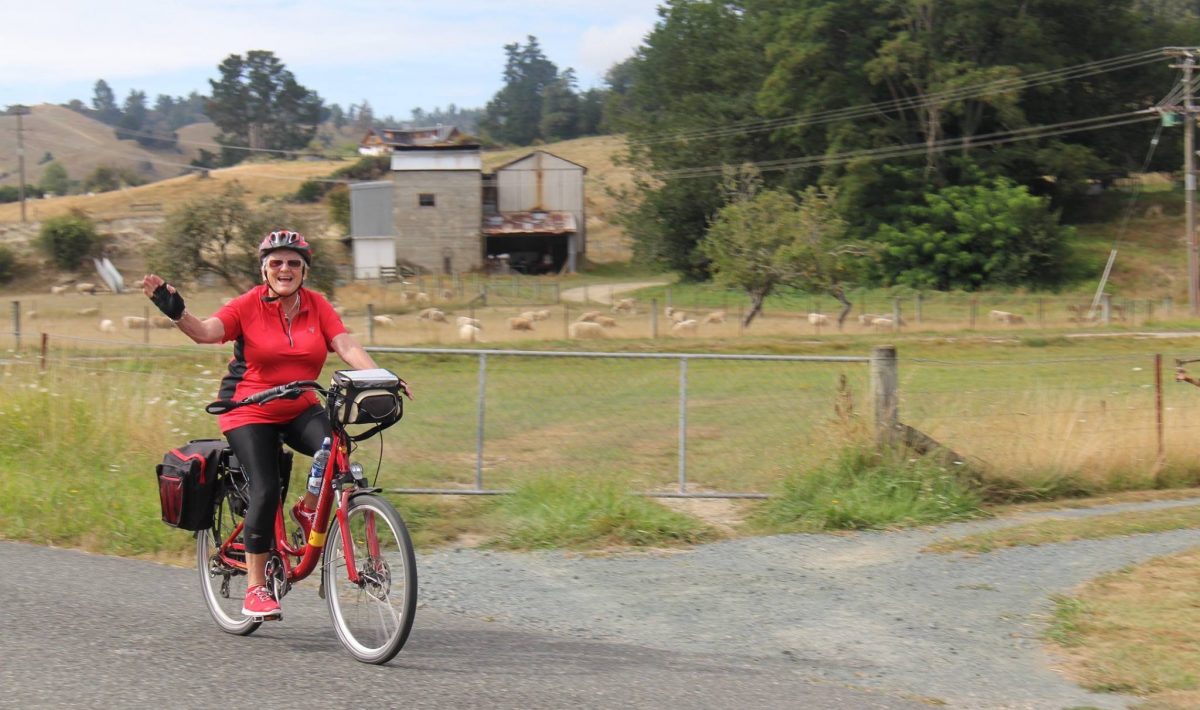 The Great Tasman Taste BIKE trail on my e-bike! 185 kms

For the last six years a group of friends, with an average age of 70, tackle one or two of the NZ cycle trail rides. This year, however, will be different for me as I will be riding my new E-bike for the first time on a multi-day ride!

I must admit to being somewhat negative about e-bikes in general when my friend first bought one several years ago.  She cycled with her e-bike on our last two annual bike and as a group we said such things as ‘that is cheating” to which my friend would smile to herself and say “ I don’t care, I just love it”!  And now that is my response to the very same comments! I just love my e-bike!  Why?

Well I am approaching 70 years of age and though I regard myself as fit and healthy I do not have as much energy as I did – so why not help the ageing body and enjoy the bike rides!

Having driven down to Nelson from Auckland via the inter islander so my friend and I could bring our E-bikes, we headed off on the first leg of our trail and my first multi-day bike ride on my new red E-bike. (You can hire E-bikes but they are still a little expensive – from $45-64 per day)

Day 1 Nelson – Wakefield and back to Brightwater- 40kms

Oh the joy of riding this bike – one can put as little or as much effort into it as you want.  Mostly on the flat I had it on 0 level of motor assistance but always had the throttle to move if I needed help.  The electric bike is a much heavier bike than a regular titanium bike so you really need power for the slightest hill but you also use your gears as you would on any bike.

We set off from Nelson i-site on a very well marked cycle way. We rode along the railway reserve cycle path which operated as a railway line from 1876-1955. Passing the Nelson airport we headed towards the coastline and had beautiful views over the Tasman, Waimea Estuary and it birdlife and the Western Ranges.  What I love about riding the e-bike is that as a keen photographer I can stop anywhere and not worry about catching up with my group as I can use my motor! Plus I can take the time and energy to enjoy the views and wildlife. The first section of the trail was pretty flat and had a smooth surface.

Passing through the thriving metropolis of Richmond we needed to negotiate a few sets of traffic lights but soon we were out amongst the vineyards, berry farms and pastures green and on our way to Brightwater where we stopped at the HQ café for a well deserved coffee.  Leaving Brightwater we visited the memorial to Lord Ernest Rutherford, who is considered one of New Zealand’s greatest scientist and who also split the atom. He was born just outside Brightwater and there are several venues dedicated to his memory.

The lovely sleepy village of Wakefield was our next stop.  It has several historical buildings dating back to the 1800’s. Wakefield school is the oldest working school in New Zealand and the lovely old church we passed on the way called St John’s Church, built in 1864 is New Zealand’s second oldest surviving church.  Alas when we got to the centre of the village neither of the two cafés were open, maybe this was because it was Monday – instead we ate our lunch in the park in the centre of Wakefield. After lunch and a wander around this lovely little town we headed back to Brightwater and the Brettons Retreat – our accommodation for the night. Our bags were waiting safely for us thanks to our arrangement with Andrew from Trail Journey’s Mapua to move our bags from one place to the next.

Bretton Retreat is just that – a little oasis situated right on the cycle trail. Very comfortable accommodation and lovely dinner and breakfast served in their large dining room.

I have to admit to feeling fresh and energetic at the end of the day thanks to my E-bike!

This was the day everyone was dreading as it was long with some hills and some surprises! I hoped my battery which had been charged overnight would last the distance. Andrew from Trail Journey’s arrived at 0800 to pick up our bags, our bikes & us and take us up over the Dovedale summit (326m) as far as the tar seal on the other side. As we snaked our way up the heavily gravelled road we all breathed a sigh of relief that we did not have to attack that hill!

Back on the saddle again – no need for gel saddle covers for me as my E-bike has a very comfortable saddle. The next part of the ride was downhill, through pine forests, open countryside, fields of belted galloway, goats and the tiny settlement of Woodstock with about three houses.  There is no coffee stop along this route until you get close to Kaiteriteri so we picked a beautiful spot by the Motueka River bank (watch out for the sandflies).  It seems that tobacco was grown in the region between Woodstock and Riwaka but all that is left are a few kilns with vented roofs. We skirted Riwaka to head for Kaiteriteri and here was the surprise of the day – a mountain bike park!!  Could the E-bike cope, it is not the easiest to handle on the switchbacks. All the literature told us it was an easy ride through the park but I guess it depends on what one’s definition of easy is.  I did not think it was easy but me and my e-bike were exhilarated at the end of it!  Later we discovered that we could have continued along the road for about 10 minutes and arrive at the same place that took about 25minutes in the bike park – but we would have missed all the fun!

We arrive in our accommodation “The Torlesse Motel” in Kaiteriteri as the drizzle started and continued for 24 hours. Luckily we had made our next day a rest day so we could take a boat into the Able Tasman National Park.  Christine, our amazing host at the motel had book us in for dinner in a local restaurant which was ten minutes down the road and offered to drive us all down there which we accepted quickly!  We had all had enough of our bikes for one day and besides it was raining.

We woke to heavy rain and wind for our planned and booked trip to Able Tasma National park and rang Wilson’s Able Tasman Tours to ask if we could cancel it.  They were extremely accommodating and accepted a cancelation from us giving us a full refund. A big ‘thank you’ to them!

Having decided as a group we would give the bike park a miss on the way back to Motueka, we waved goodbye to out fantastic hosts Lance & Christine and headed off down the tar sealed road to meet the bike trail a few Kms on. As we started on the bike trail one member of the party realised he had left his daypack at the motel. My friend who also has a E-bike offered to go back and get it as it was all uphill!  Again the joys of an E-bike, however, she was to pay for her generosity later in the day!  We passed kiwifruit orchards, rode over suspension bridge and then rode across the surging Riwaka River after the 24hours of rain.  Unfortunately, soon after that we came to a diversion that took us along the main road for longer that we liked. The diversion was due to part of the trail been washed out.  The noisy main roads were forgotten as soon as we got back on the trail as we soon found ourselves riding past the most beautiful coastline. Next we passed the wreck of the ‘Janie Seddon’ which was once a fishing boat but also is the last surviving New Zealand military ship to have served in both World Wars.  Her resting place is in Motueka harbour where she sits proudly in the sand.

After leaving Motueka we soon began the long slow climb to the highest point on Tasman view road.  Even with the E-bike I was puffing and panting by the time I got to the top but it was worth it – what an amazing view from there – and a toilet!!  You could see Moutere Inlet, Tasman sea, Motueka and Mapua. But what goes up must come down so we had a long lovely ride all the way down through the State Hwy 60 underpass towards Ruby Bay and Mapua.  A coffee and snack at the famed “ Jester Cafe” with it’s eels and eclectic furniture and then on towards Mapua where we turned off the cycleway to head for our accommodation at “The Gates” about 3kms outside Mapua.  This is when my friend’s generosity earlier in the day kicked in – she ran out of battery, mainly because of all the climbing hills and the extra 6-7 kms.  We had the bright idea that maybe I could tow her so we put a strap between the bikes each holding one end so I could tow her – it worked but was hard work but we got there, happy but tired.

Though I booked accommodation in July 2015 for Feb 2016 many places were already booked out. It was hard to find suitable places that could accommodate all nine of us. However, we were lucky to find “The Gates” 197 Seaton Road Mapua, it was really superb with lovely view across the countryside. (but no cafes close by)

Once everyone arrived the conversation got around to dinner and as we had no cars – only bikes to go into Mapua for dinner our E-bikes came into there own once again as we rode back into town to collect dinner for the group. Thank heavens for pannier bags for beer and wine!!

Batteries charged – physical & mechanical – off we set for the Mapua ferry to take us across to Rabbit Island.  The ferry had not run the day before because of debris from the storm. Luckily ‘Trail Journey’s ‘  kept us informed and we rode to catch the 10am ferry.  Mapua warf is a quaint place, several cottage industry shops, bars and waterfront cafés. A ticket for $7 got me and my E-bike across to Rabbit Island  to ride through the pine forests along a13km stretch of beach where locals come to relax.  The tide was out as we rode along allowing us the joy of seeing herons and spoonbills fossicking for food.  As we were not on a wine tour – we did meet lots of cyclists that were – we did not stop at any vineyards but manage to visit several on our rest day in Nelson.

From Rabbit Island it was a flat trail back through Richmond (where we had a coffee stop) and onto Nelson via a lovely downhill tar-sealed shared cycle & footpath  and back to out fantastic accommodation in Britannia heights booked through Nelson Holiday. Of course anything called Britannia Heights had to be on top of a hill and so the final insult was to crawl up the steepest slop in Nelson before sitting down to a wine on the deck to celebrate our wonderful ride. What an adventure made all the more enjoyable because of my electric bike!